Songs that made us Episode 1: Everything I own by David Gates

David Gates is best known as the frontman of the American soft-rock group Bread. He was also the group’s primary songwriter. The song “Everything I Own” was written by Gates and was originally recorded and released by Elektra on Bread’s 1972 album “Baby I’m-a want you”. This was the group's fourth album and reached number 13 on the US Popular Album charts. The album had four singles of which “Everything I own was one. The single reached number 5 on the American Billboard hot 100.

The song was written for Gate’s father. Gates says that his father was a kind and gentle man and took the time to teach Gates to read and write music and to play various instruments. He was influential in introducing Gates to classical music, which, in Gate’s word is “his foundation”. He attributes the song title to the kind words of his father after Gates sent his mother a gift of an orchid, which was more than he could at the time. Gate’s father was touched by the gesture and said that Gates could have “Everything she owned”.

In describing how the song was written, Gates said that, as usual, the music lead the way in the process, but that the lyrics came quickly as they tried to keep up with the music. He specifically wrote the line “I would give everything I own just to have you back again” so that the song could be interpreted as a love song but when he sang the song to his wife, she immediately knew it was not a love song, in the traditional sense of the word, but a dedication to Gate’s father.

Born in 1940, Gates was surrounded by music from an early age. His father was a band director and his mother was a piano teacher. Unfortunately, Gate’s father did not live to witness the enormous successes that Bread became but he see some early progress and indications of the accomplishments that were to follow.

For many years Gate’s did not reveal the source of inspiration for the song but at his father’s funeral  Gates said “My success would have been so special to him as he was my greatest influence. So I decided to write and record ‘Everything I Own’ about him. If you listen to the words, 'You sheltered me from harm, kept me warm, gave my life to me, set me free,' it says it all." Gate’s father passed away in 1963

The group Bread, which was based in Los Angeles, was formed as a creative outlet for the prolific song-writing of Gates. Gates had already had some songwriting success with the Monkees and Chuck Berry. The group released five albums in four years with two in the year of 1972, the year that “Everything I own” was released.

Andy Williams produced the first known cover of this song, interestingly also in 1972. His track was released on the album “Love Theme from "The Godfather". The instrumentation and phrasing of William’s version sounds remarkably similar to Bread’s version, at least to my untrained ear.

Jamaican reggae artist Ken Booth heard the Andy Williams version of the song and decided to record it for his next album. Apparently, he needed a “filler” track for the 10th song on the album. The song quickly reached number 1 in Jamaica and was picked up by Trojan for release in the UK.  The BBC contacted Booth to put the song on top of the pops and it became a British chart-topper. Apparently, Booth did not receive royalties from this number one song as Trojan went bankrupt.

Shirley Bassey recorded the song for her 1973 album “Never Never Never. Bassey belts out the lyrics in her usual robust style. The song was withheld from her 1973 album but was finally released on the 1994 CD compilation.

The Boy George version of “Everything I own” (no doubt inspired by the Ken Booth version) was released in 1987. Boy George presents the song in the same laid back style as "Karma Chameleon" and "Do You Really Want to Hurt Me", the songs that catapulted Boy George into his 1980’s stardom. The song reached number 1 in the United Kingdom, Canada, Ireland, and Norway. It was and is his only number one UK hit as a solo artist after his departure from Culture Club.

Since then the song has been covered by many other diverse artists, although not many have strayed as far from the original Bread style as Boy George and Ken Booth. Covers include Olivia Newton-John in 1973, country singer Crystal Gayle in 1982, Petula Clark in 1974 and pussycat doll, and X Factor judge Nicole Scherzinger.

The song has stood the test of time and is still alive and well in the 21st century with Rod Stewarts 2006 version and Boyzone in 2013. There is a great mash-up of Chrissy Hind of the Pretenders and Jason Mraz in the 2006 movie Happy Feet.

I posted this song in the Facebook song a day challenge on Friday 3 July 2020 and we had some wonderful renditions in our community.

The song a day challenge is a group on Facebook where I post a challenge song every day. There is a karaoke-style play-along video with scrolling chords and lyrics to help you learn the song. Members then post a video their own acoustic rendition on the group.  You can join the song a day Facebook challenge here. You can subscribe to my YouTube channel with hundreds of play-along videos for guitar players here. Here is a link to the play-along video of Everything I own on Youtube. So get your guitar out of the cupboard, wipe off the dust and start playing along. 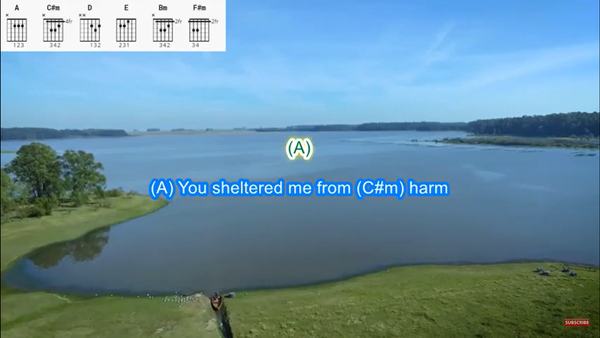 You sheltered me from harm
Kept me warm, kept me warm
You gave my life to me
Set me free, set me free
The finest years I ever knew
Were all the years I had with you

You taught me how to love
What it's of, what it's of
You never said too much
But still you showed the way
And I knew from watching you
Nobody else could ever know
The part of me that can't let go