I am currently performing with a wonderful musician, Lebogang Lechela ,who plays some fantastic covers of well known songs on the acoustic guitar. The other day we recorded a few of these tracks in RealBand and here is my favourite.

If I Were a Rich Man

So I thought you may be interested in the process I used to record and mix this track. So here goes.

1. Record the track in RealBand

To do this I used my Focusrite Scarlett Solo audio interface. On the one channel I had the guitar mic'ed  up with Rode M3 condenser microphone (which is, btw, the only mic I have!). The mic was placed over the sound hole, about 25 cm away. You should always make sure the mic is not too close otherwise it will not only interfere with the guitarist but you will get what they call "proximity effect" on the recording. On the other channel I had the guitar going directly into the interface using a standard instrument cable.

First you should check the levels. Use the gain controls on the audio interface to make sure the levels are good on both channels. You must never see any red on the these dials.

Once you are set up and the guitarist is nice, relaxed and has had his first whisky, then hit record.

If the guitarist makes a mistake half way through the song, don't waste time by starting all over again, just "punch him in". Yes, that is an actual audio recording term but it doesn't mean you must punch him in the face! Just move your mouse down to the next track, go back a few bars before the mistake and hit the record button again. The guitarist will start playing along at his leisure and will hopefully make no more mistakes along the way. Too many mistakes and you really do need to punch him in the face (only joking!).

Here is a picture of one of my tracks with a "punch in".

2. Edit the track to get one composite track

Edit the track to get all the punched in sections onto one track. To to this zoom in and select a spot where there is a gap in the audio. In the above example this was at  28 3 23. You can press F6 to find out the exact time stamp of this point in the track.

Now select the second audio track from, say 28 3 23 to the end. To do this accurately press F7 to start the selection and then F8 to end the selection. Then press Control-C to copy the selection onto the clipboard. Move your mouse up to first track and press Control- V. Make sure you enter the exact time stamp you want to paste back into because invariably your mouse moves a few cents when you try to paste. Listen back to the track to make sure it flows nicely. 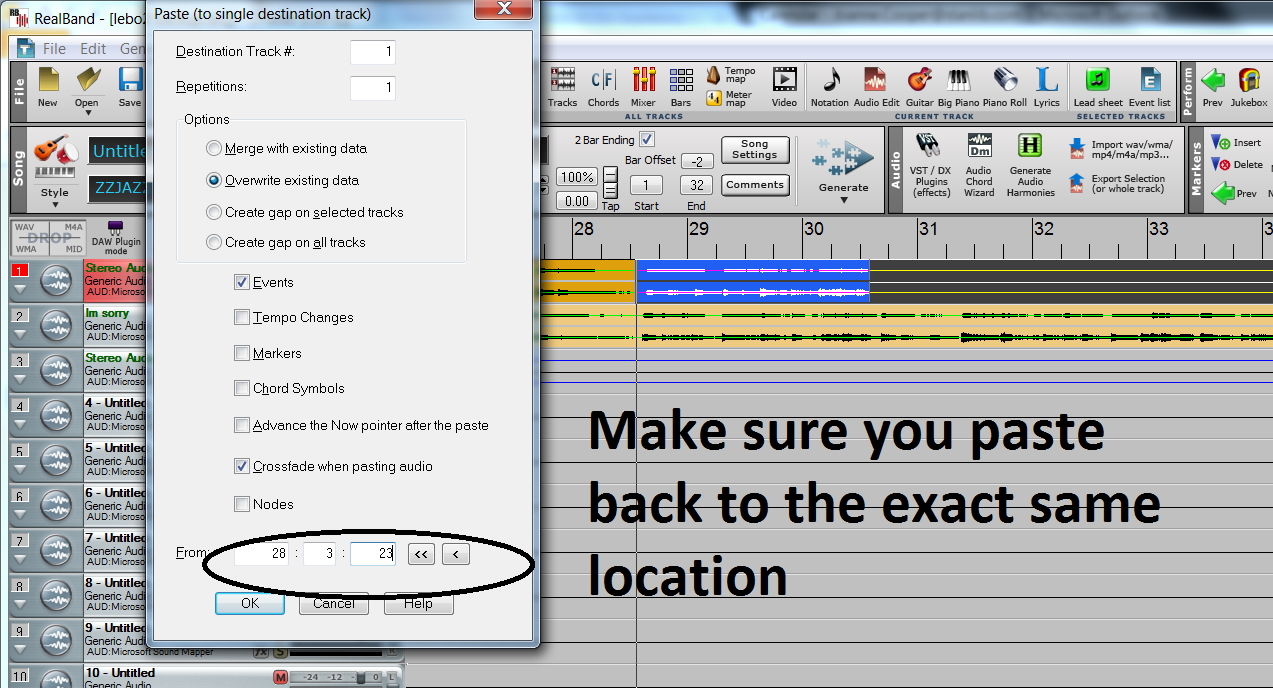 Then delete the second track. You should now be left with a single stereo track.

Now select the whole track and split it into two mono tracks. 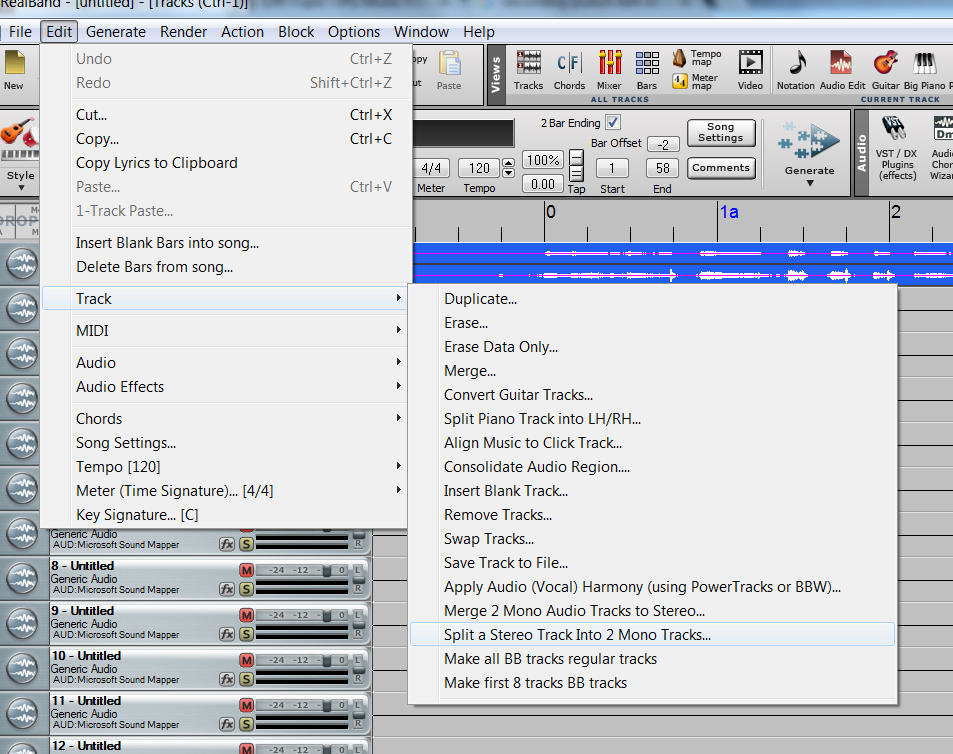 And now you are ready to mix!

Mixing is by nature a very subjective process and no two people will mix a track in exactly the same way. I describe here what I did to mix this track. Anybody who would like to have a go at mixing this can contact me and I will send the raw track through.

The main idea behind this particular mix was to use the track recorded direct-in as the main source of sound. The simple reason for this was that the sound of this track appealed to me more than the mic'ed-in version. For you it may be different depending on the type of mic you used as well as mic placement. I used the mic'd in track to add some width and to blend in the highs.

Here's how I did it.

First I used EQ to extract the highs from the mic'ed track. Here are the settings I used. 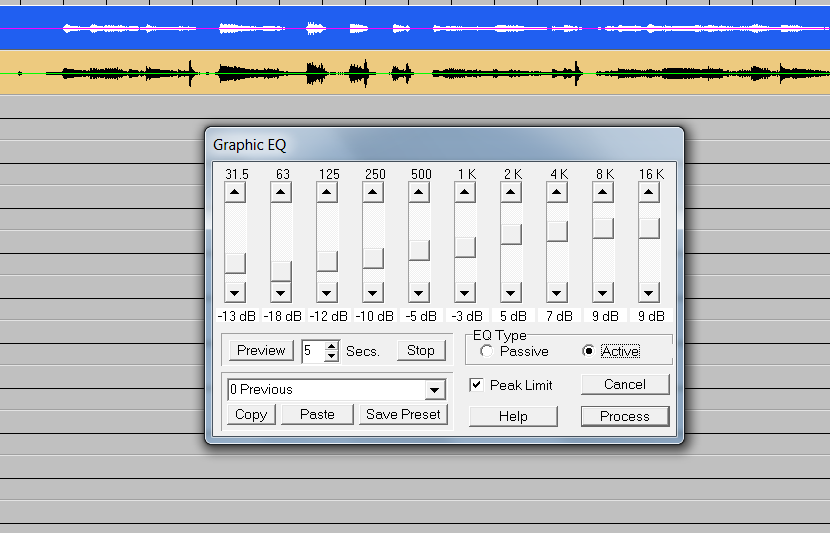 Then I copied the EQ'ed track to a fresh track and pasted it 5 cents to the right to get some stereo effect. 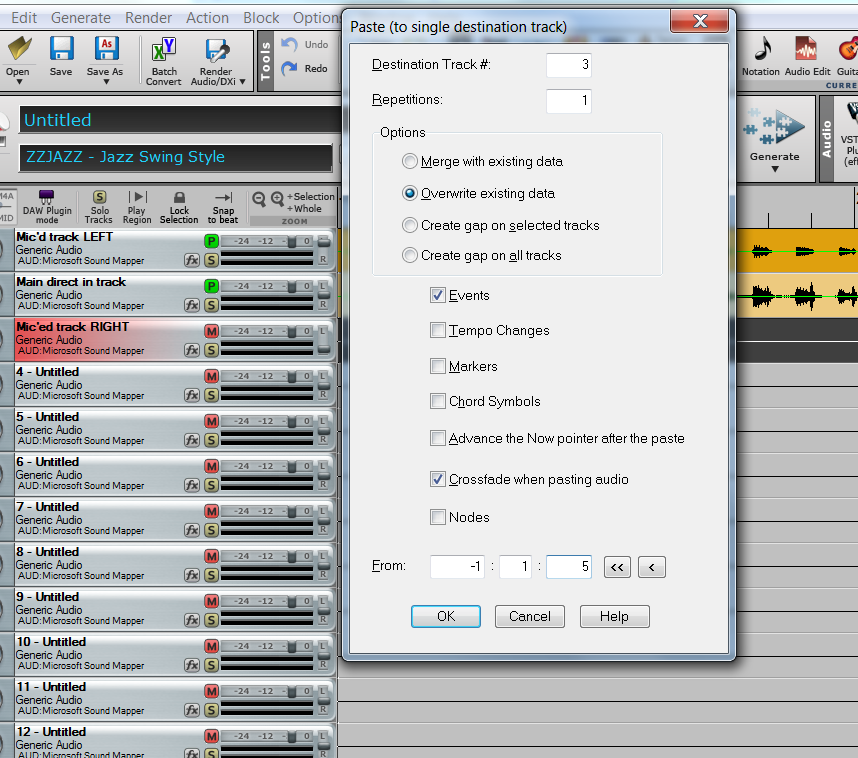 I panned the mic'ed-in tracks to the left and right by -40 and +40 respectively and the direct-in track dead center.

I then rendered the three tracks down to a stereo track. 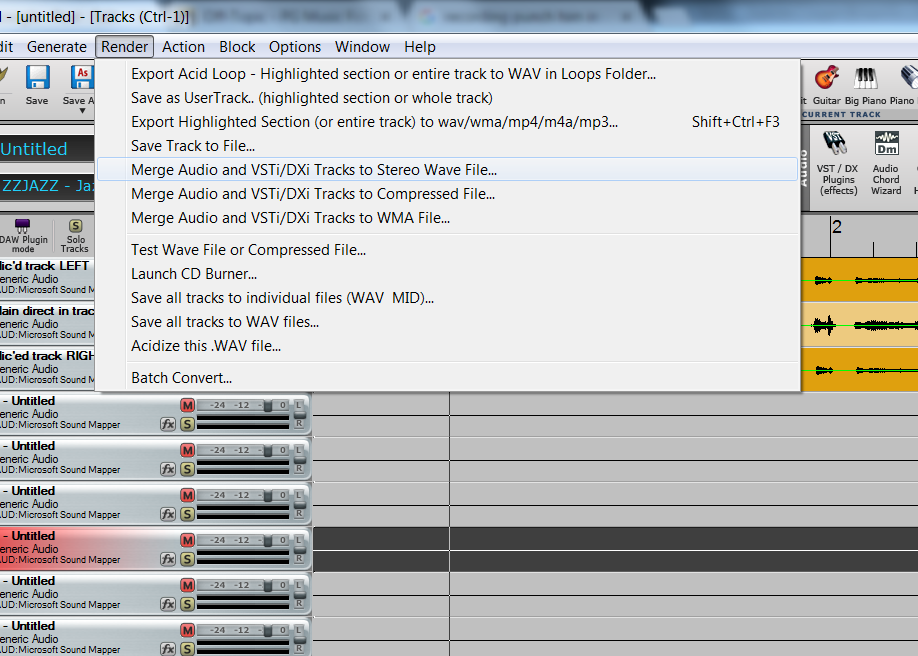 1. I used the Virtual Tape Machine from Slate Digital to add a bit of analogue colour. This is very subtle and is obviously an optional step. You can probably use any virtual tape plugin and achieve a similar result or leave off this step completely and never know the difference!

3. Izotope Ozone 5. I used the "Acoustic guitar tame clicks and scrapes" and the "Guitar track - dynamic EQ and Reverb" presets

I then checked that the track was within my usual parameters for dynamic range, peak and RMS.

In retrospect I could have worked a little harder to make sure this track was better balanced!

Well, that is about it! If anybody has any other suggestions or would like to have a go at mixing this track please leave a comment or drop me a line.

I look forward to hearing from you.