How I use Band-in-a-Box in my songwriting

Firstly, I appologise for no blog post in June. I was very busy preparing to perform at the National Arts festival in Grahamstown, South Africa and this was taking all my energy. If you want you can see one of live shows from the festival. Here is a link to the full show on Youtube

I am currently busy taking part in the 50 90 songwriting challenge where songwriters from all over the world participate in a friendly collaborative internet forum and attempt to write 50 songs in 90 days. While I do not hope to achieve the 50, I am taking part on and off over the three months and am attempting write and record some new songs that may be suitable for licensing.

So I thought, for this month, I would cover how I use Band-in-a-Box in my songwriting process. Not only is Band-in-a-Box a fantastic tool with which to produce your own song but it can be used to help you compose the song in the first place. This is especially useful if you cannot play an instrument. I do play guitar (fairly badly but still!) but still use Band-in-a-Box extensively in my songwriting. If I didn’t then everything I write would go G C D, G C D etc. You get the picture!

There are as many different ways of writing a song as their are songwriters but I am going to take you through my own process and hopefully inspire you to use some of these tips to write some new songs.

1. Decide on a lyrical direction and genre

I usually start with a lyrical idea and a genre that may suit this idea. I may have a full set of lyrics, just a few phrases or even just a title.

Paradise is everywhere
For us to share
I'll see you there

Corny I know, but it is a start!

I think these sunny lyrics would suit a folky swing type thing , maybe with a ukulele.

Open up a blank song and choose your most favourite key. Mine is G or A. 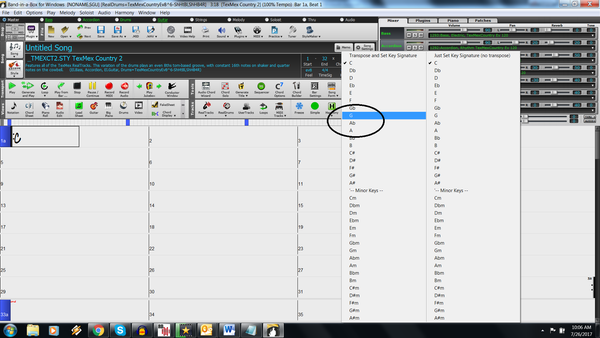 Now open the style picker and spend some time exploring suggested styles of songs you hear when you think about these lyrics. I am thinking a country, folky, banjo, ukulele type thing for this song.  Sort of like Jason Mraz and “I'm Yours”.  So type in "Jason Mraz" and press enter. 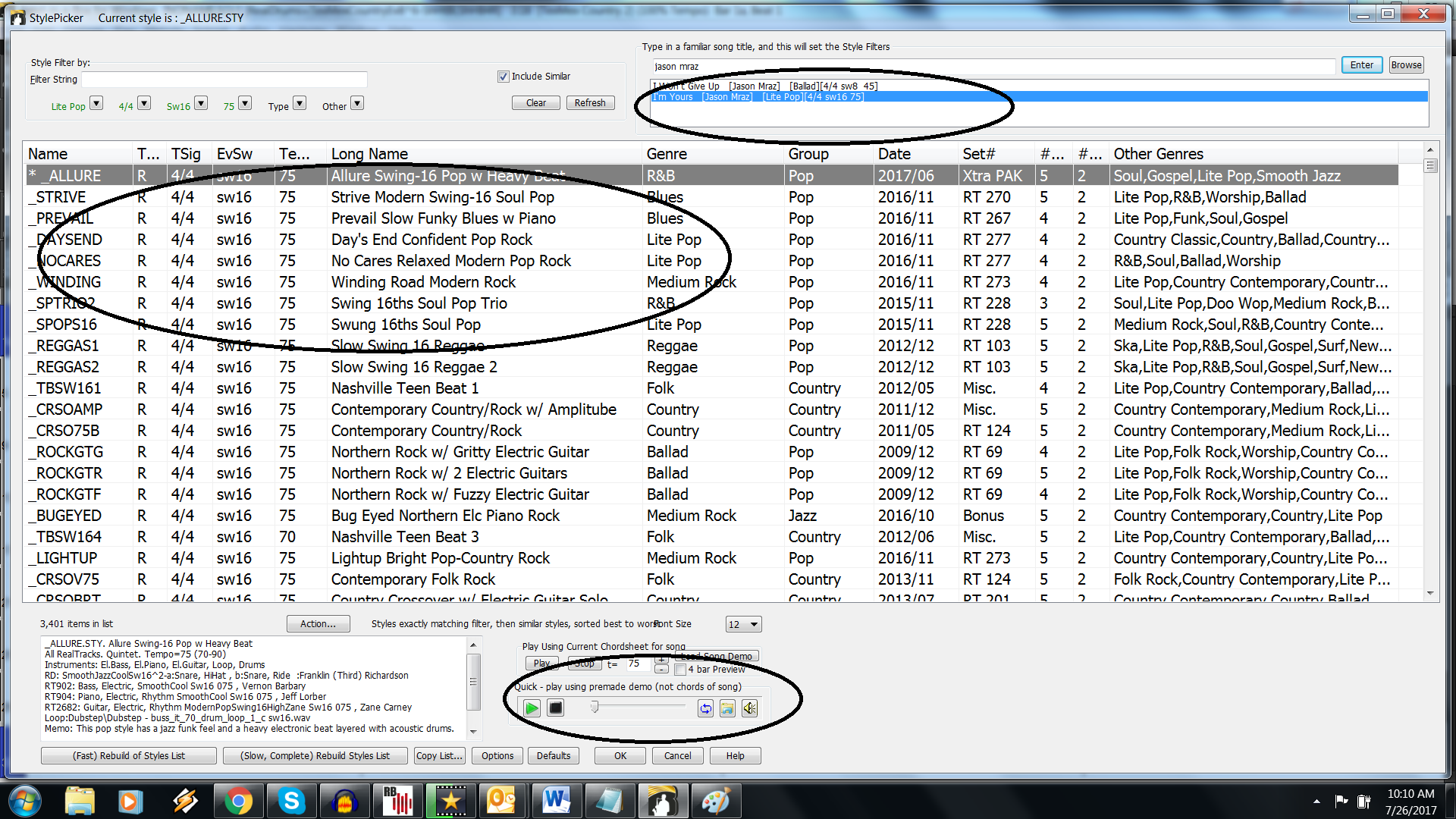 Band-in-a-Box will bring up a couple of Jason Mraz songs so select the one you want and press enter. Now Band-in-a-Box will bring up a list of styles that would be suitable if you were making a backing track of this song. Listen to a couple of the suggested styles and see if any  inspire you. Can you “see” your lyrics in any of the suggested styles. If not, pick a different song and try that.

Now, I heard a ukulele on the song so I can put a filter on ukulele and press enter. 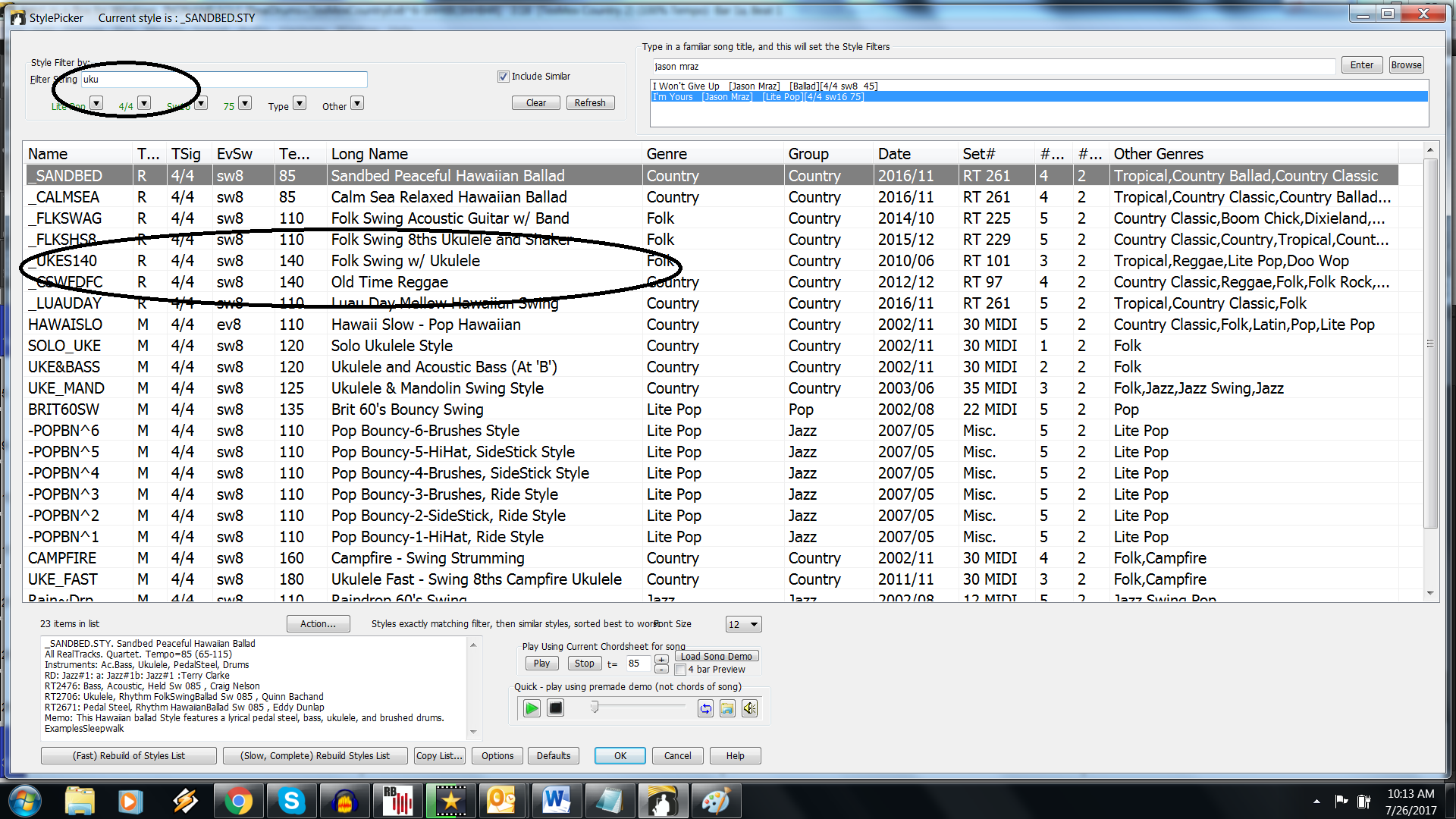 The UKES140  one is a great suggestion! Press enter and your Band-in-a-Box  session will be populated with that style and tempo, in the key that you chose earlier. So I have a folky, swingy type thing going on.

Now go into the “melody” option and then select "Melodist - Generate Melody and/or Chords" to help generate some chord ideas for your song. 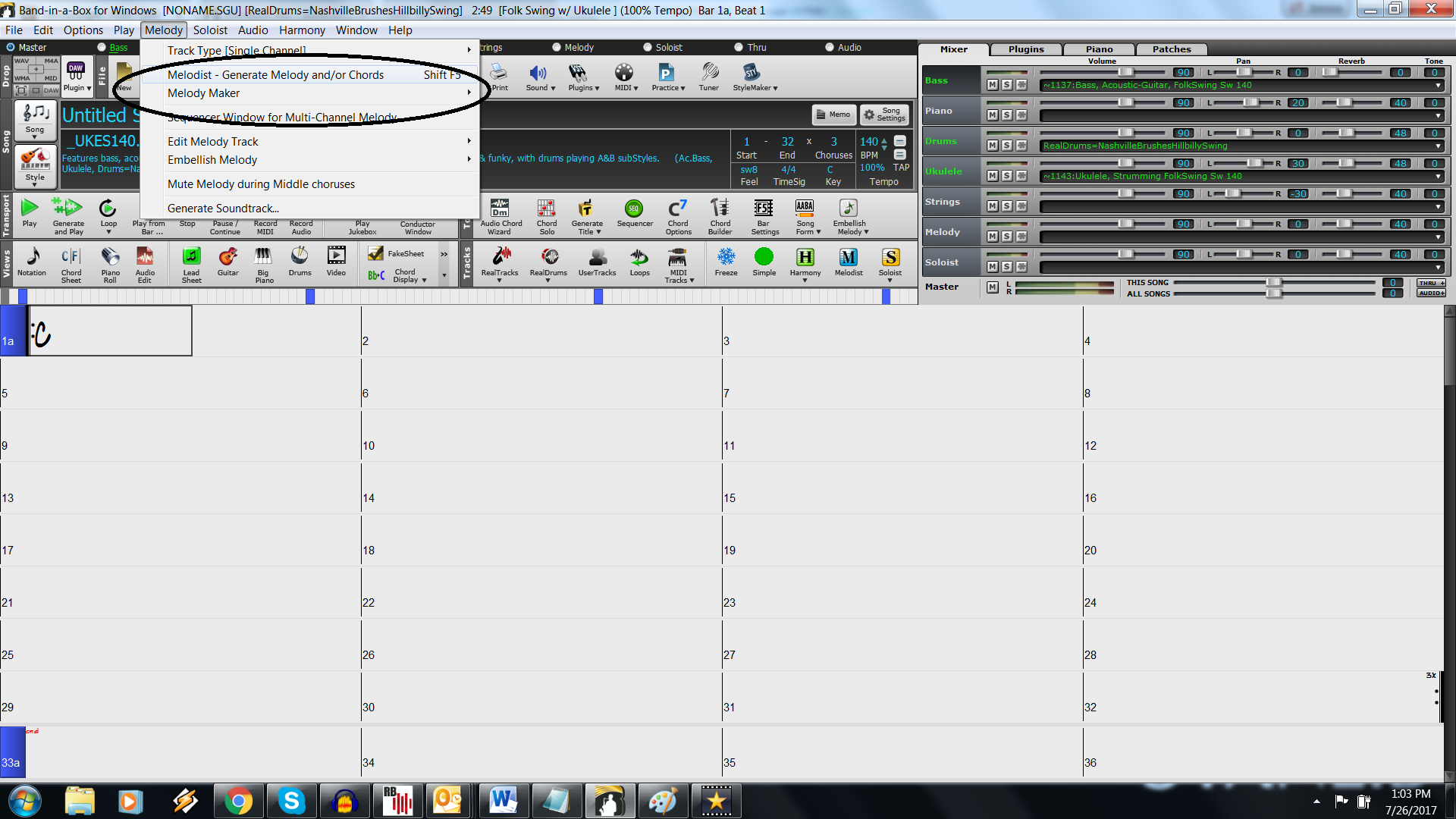 Select the right key , in this case "G", select a suitable style, "Bouncy swing pop” is a good one for this one, uncheck the “allow style changes” box, update the tempo, in this case 140 and hit enter. 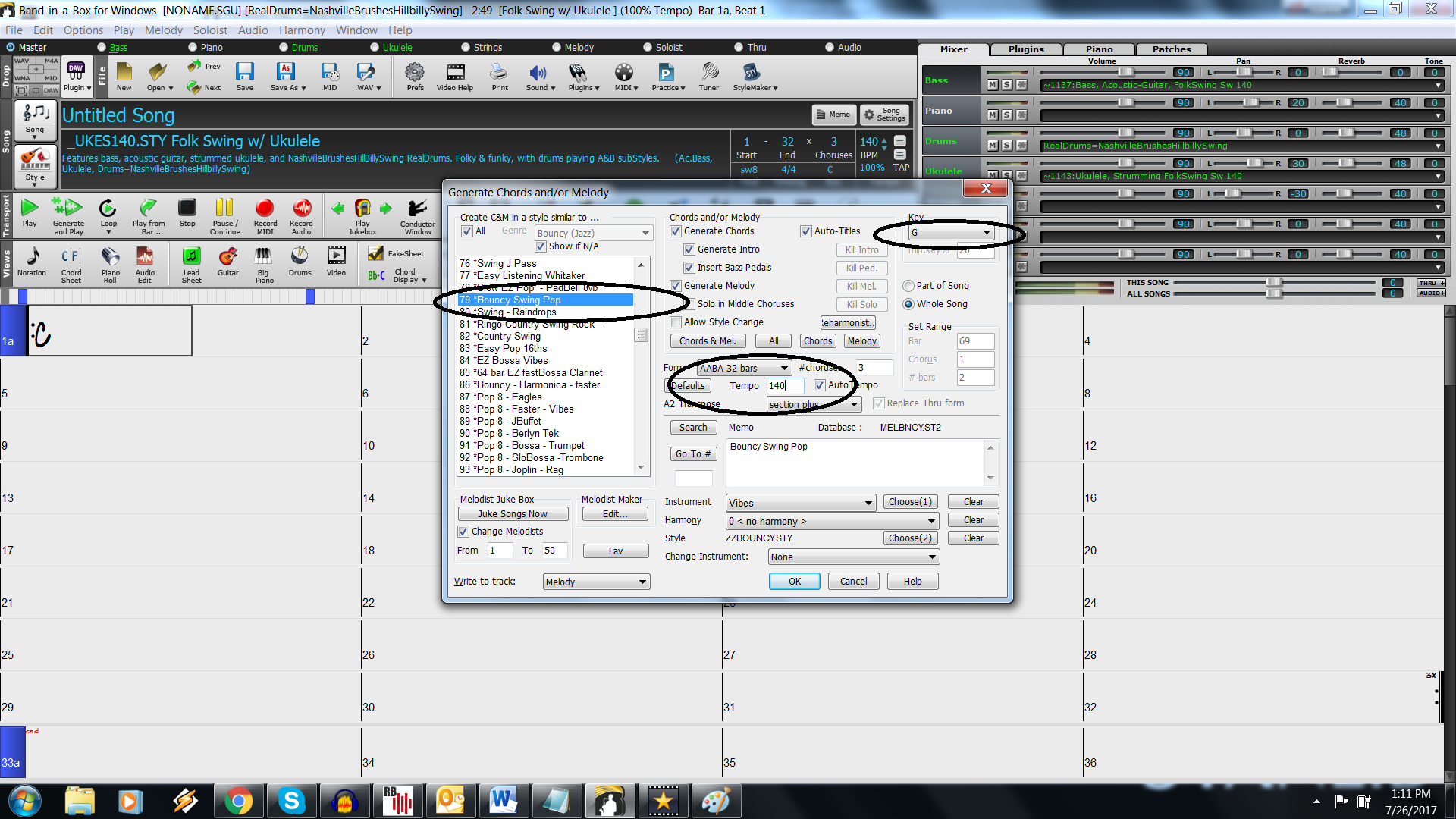 It also generated 3 repetitions of it and it is 2:58 long, which is in the ball park . I will usually simplify the chords.  For example I may change the generated the "E7 flat nine" to a simple "Em" but that is probably more due to my own personal preference and the type of songs that I am writing. 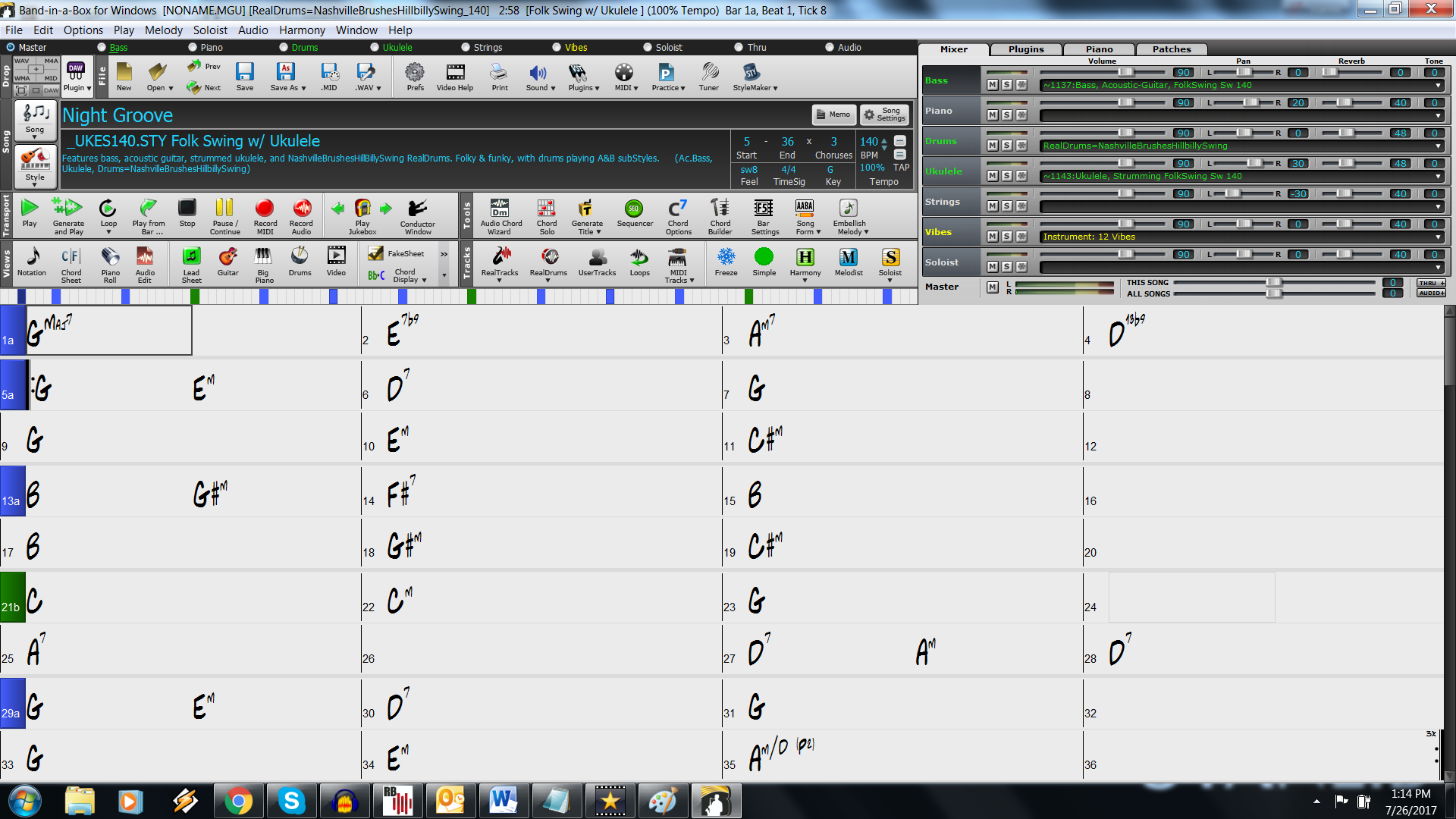 I now have an excellent start for some chords for a pop song.

4. Sing over the generated chords

Now this is what I do. I listen to the generated melody a few times just to get a few ideas in my head. Then I mute the melody and just sing over the chord progression again and again and again until something sticks. If you play piano it may help you to pick out a melody on the piano. I think it was Lennon and McCarthney who said that they used to write a song one day and if they could still remember it the next day then they knew they were onto something good.Today we have so many more tools than they had. We have OUR PHONES! I simply turn on the voice recorder on my phone play the chord progression and sing over it again and again. Often I will start with the chorus, which is usually easier than the verse.

If you find you don’t like the chord progression much then try regenerating it a few times. If you find the “melody” is putting you off, then just mute it.I usually strum along on my guitar at the same time while making changes to the chords in Band-in-a-Box on the fly. Sometimes I will switch off Band-in-a-Box and just play the chords on my guitar, updating Band-in-a-Box with the chord changes as I go along. I keep the lyrics open in Windows Notepad on my computer and make lyric changes also as I go along.

Here is an idea suggested by Mario DeLaura on the PG Music forum. If you are stuck in finding a good melody, here is a tip you can use that may help. Save the Band-in-a-Box file. It will save it as a .MGU file which tells you that there is a melody included in the file. Now open the Band-in-Box in RealBand. Just be aware that the first time you open a Band-in-Box file in RealBand it will take a while to generate because it has quite a bit of thinking to do. 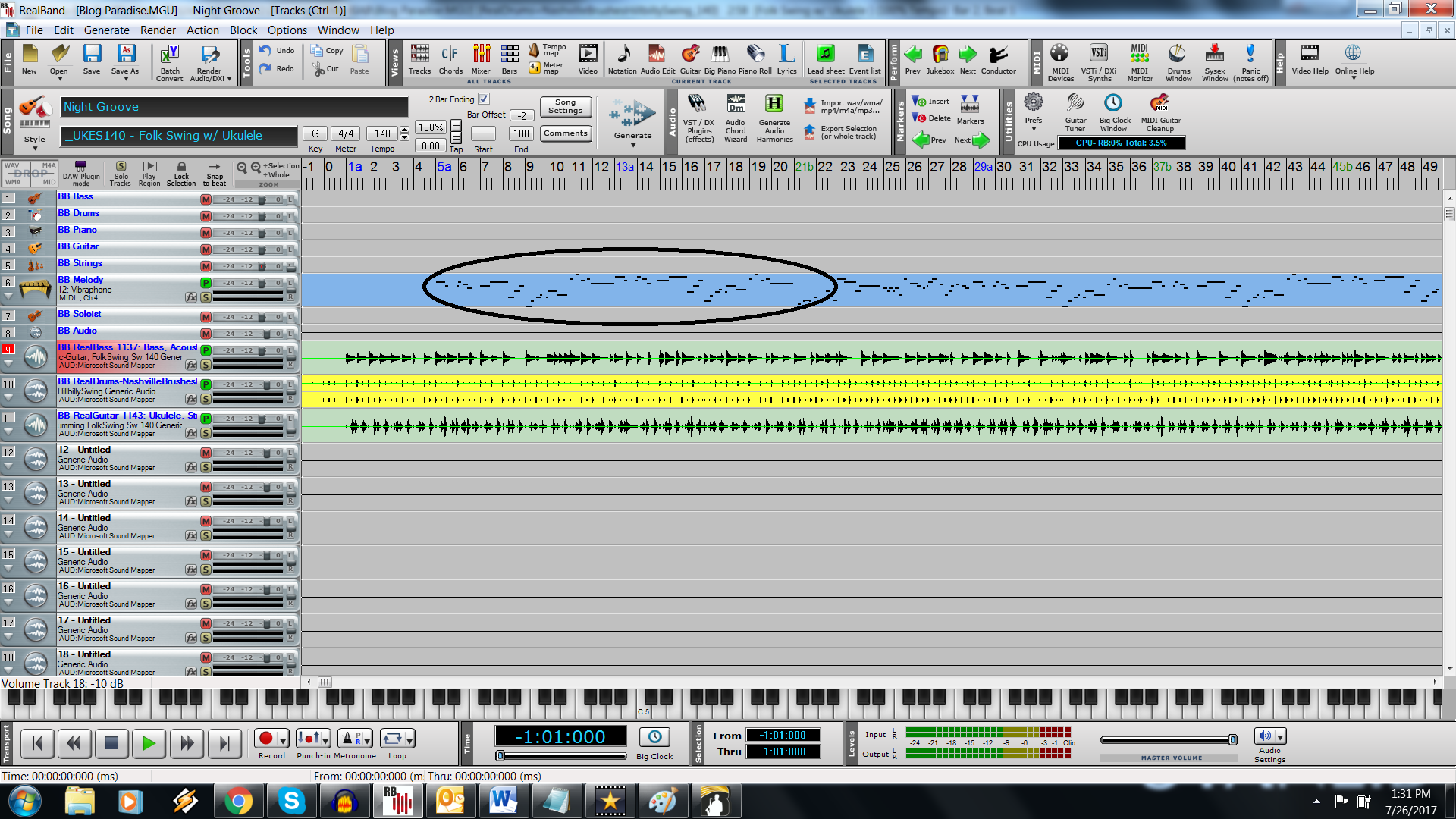 Listen through the generated melody (the blue track highlighted above) and find a melodic phrase that appeals to you (usually 2,4 or 8 bars). Delete the rest of the melody and copy the selected phrase throughout the rest of the song. Now sing along, make changes, additions and changes to fit your lyrics.

Thanks for the tip Mario. I am definitely going to give this a try. .

6. Decide on the structure of your song

Once you have the chords,a melody, a rhythm and some lyrics for at least the first verse and the chorus then you can work on deciding on the structure of the rest of your song.

For this one, I am going to have

To get Band-in-a-Box to reflect this structure I will get rid of the 3 repetitions that Band-in-a-Box automatically created and increase the end bar to something arbitrary (say 100).

Then copy and paste the chords for your versus and choruses down the song. I will then insert a blank 8 bars for the bridge at the correct spot. Finally I will set the ending to the correct bar. I will then recheck that the length of the song is less than 4 minutes.(I know you are saying a song will be as long as a song wants to be but history has shown that hit songs are generally between 3 and 4 minutes. I know there are exceptions like "Hey Jude" and "Hotel California" but if you can write a song as good as either of these two then by all means make it 7 minutes long). 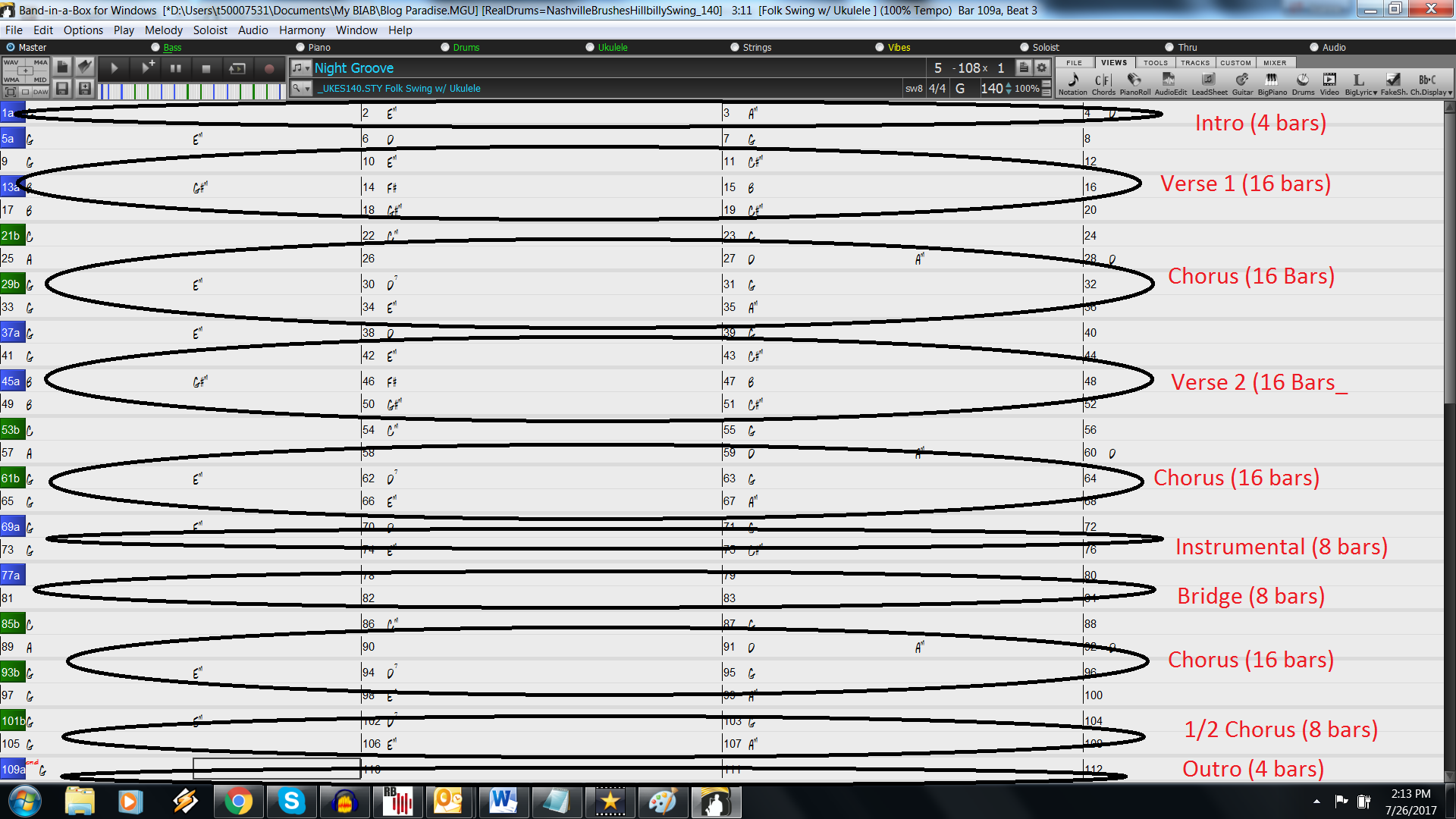 So now to compose the bridge for the 8 blank bars in the middle of the song. I can re-generate some chord ideas for the middle 8 by selecting those 8 bars and then regenerating "part of the song". 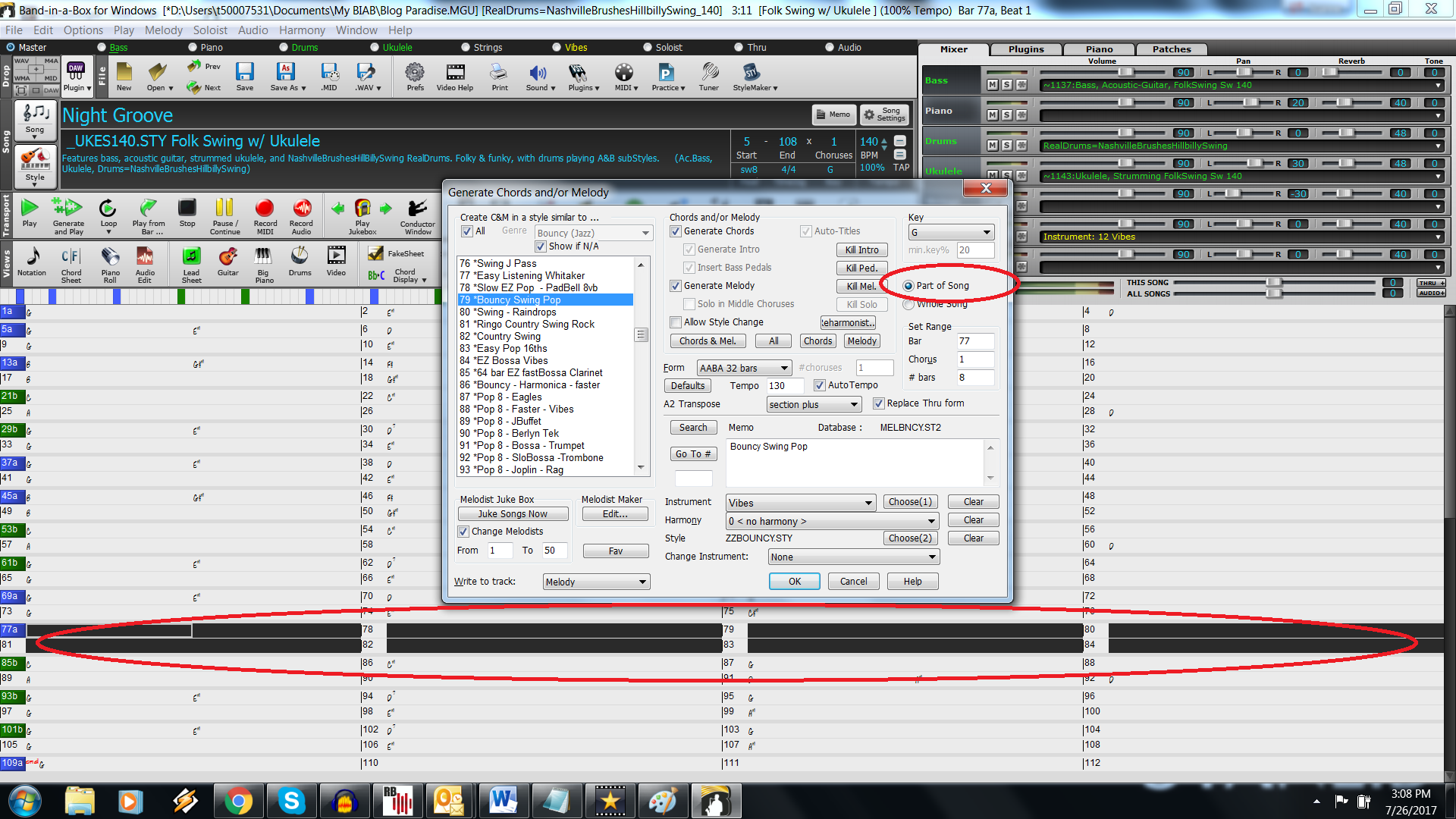 So now you have a great song structure to work with that will help you to finish all your lyrics.  The writing of lyrics is another whole topic and if you would like me to write a blog post on this enormous topic then please let me know.

In order to finalise the song I will sing it though many times. I will usually strum along on my guitar. Often I end up changing some of the chords, modifying the tempo and, nearly always, trying out a different key to see what suits my voice best (rather that sticking with the key that is easy for me to play on the guitar!!!). I try to make sure the song stays under four minutes, which may sometimes mean making tempo changes or cutting out whole sections of the song.....

And still I sing it through many many more times until I am finally ready to start recording.

So there you have it. That is how I use Band-in-a-Box in my songwriting. I would love to hear your own methods and tips.