I recently launched my video course First Song with Band-in-a-Box for windows and one of the things that has peaked the interest of the more experienced users of the course has been how I use holds in my arrangement to create interest. It really is quite a nifty trick and worthy of a its own blog post.

Here is a song I wrote recently with Liz Petty as part of the 50 90 songwriting challenge. The song is called Stop and Smell the Roses

If you listen carefully you will notice how I don't have all the instruments playing all the time. For example, in the introduction the acoustic guitar, the piano and the bass are playing only one strum per bar, while the drums are playing "normally". The electric guitar and loops do not feature at all. This is achieved by using a combination of "mute" and "hold"

There are two ways to skin this particular cat. The first is using Band-in-a-Box itself.

First type in your chords and choose a style. If you want to know more about how to do this, check out this blog post.6 Simple steps to make cool backing tracks using Band-in-a-Box or check out my video course First song with Band-in-a-Box for Windows 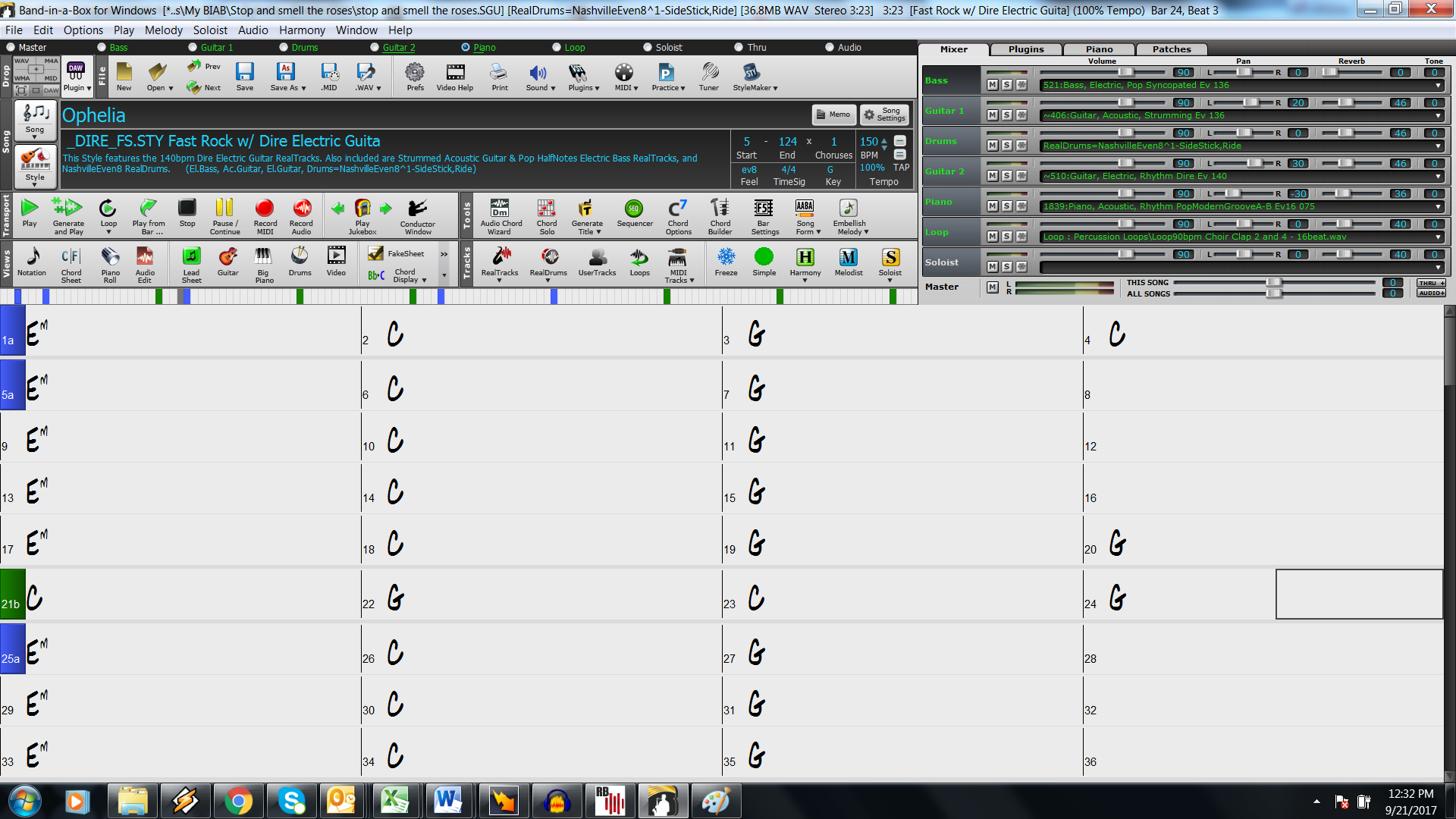 At this stage it we have the bass, drums, two guitars, a piano and a drum loop all playing all the time. For the intro I decided I wanted  to have the acoustic guitar, the piano and the bass playing one single strum at the beginning of each bar while the drums continue playing normally. I also did not want the electric guitar or loops playing at all.

First, specify what instruments you want playing in what bars. Right click on the first bar and choose bar settings. 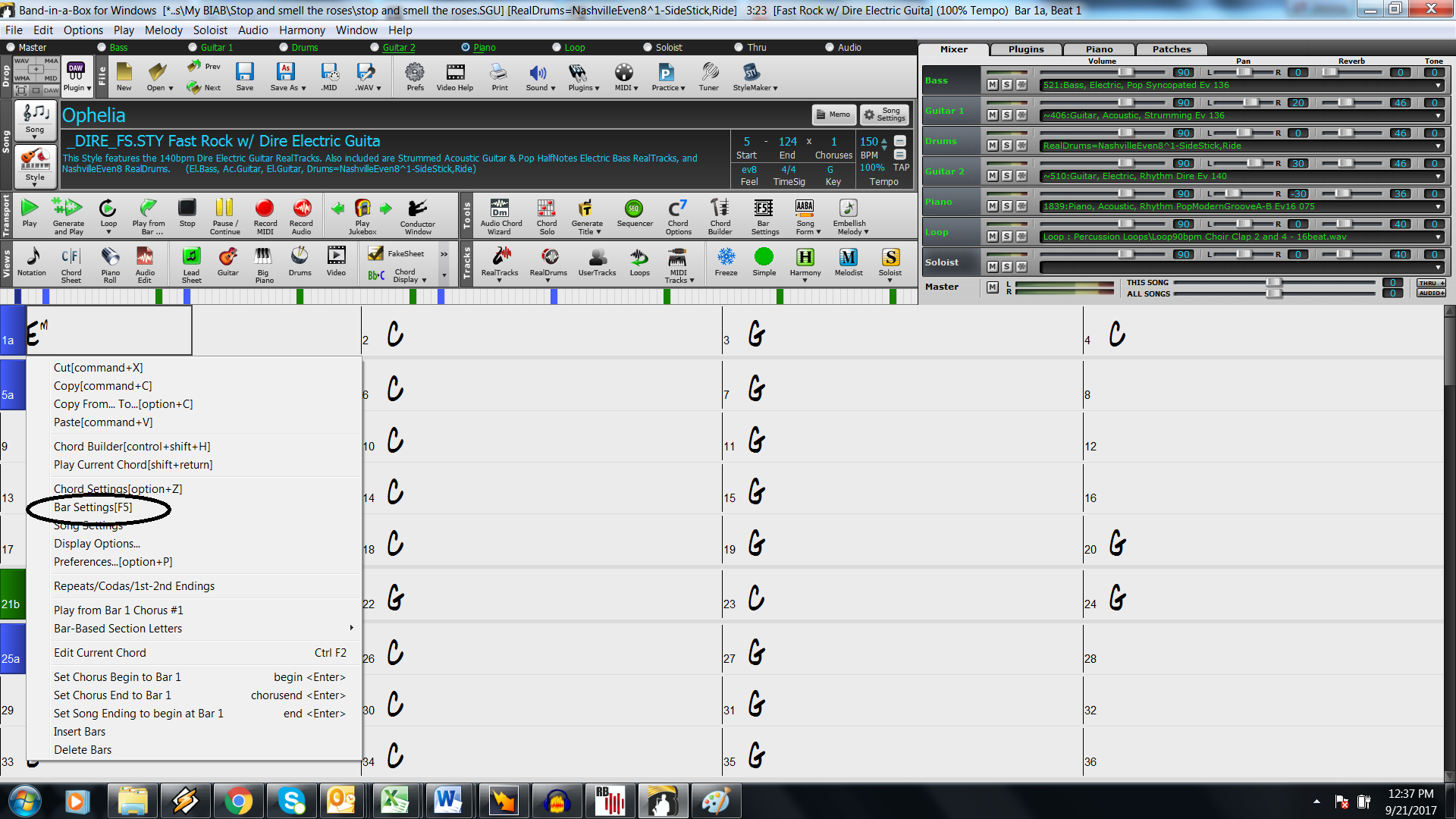 Now choose which instruments you want to mute. In this case I did not want the electric guitar (guitar 2) and the loop to be playing in the intro so I selected "mute" for guitar 2 and for loop from the drop down menu. 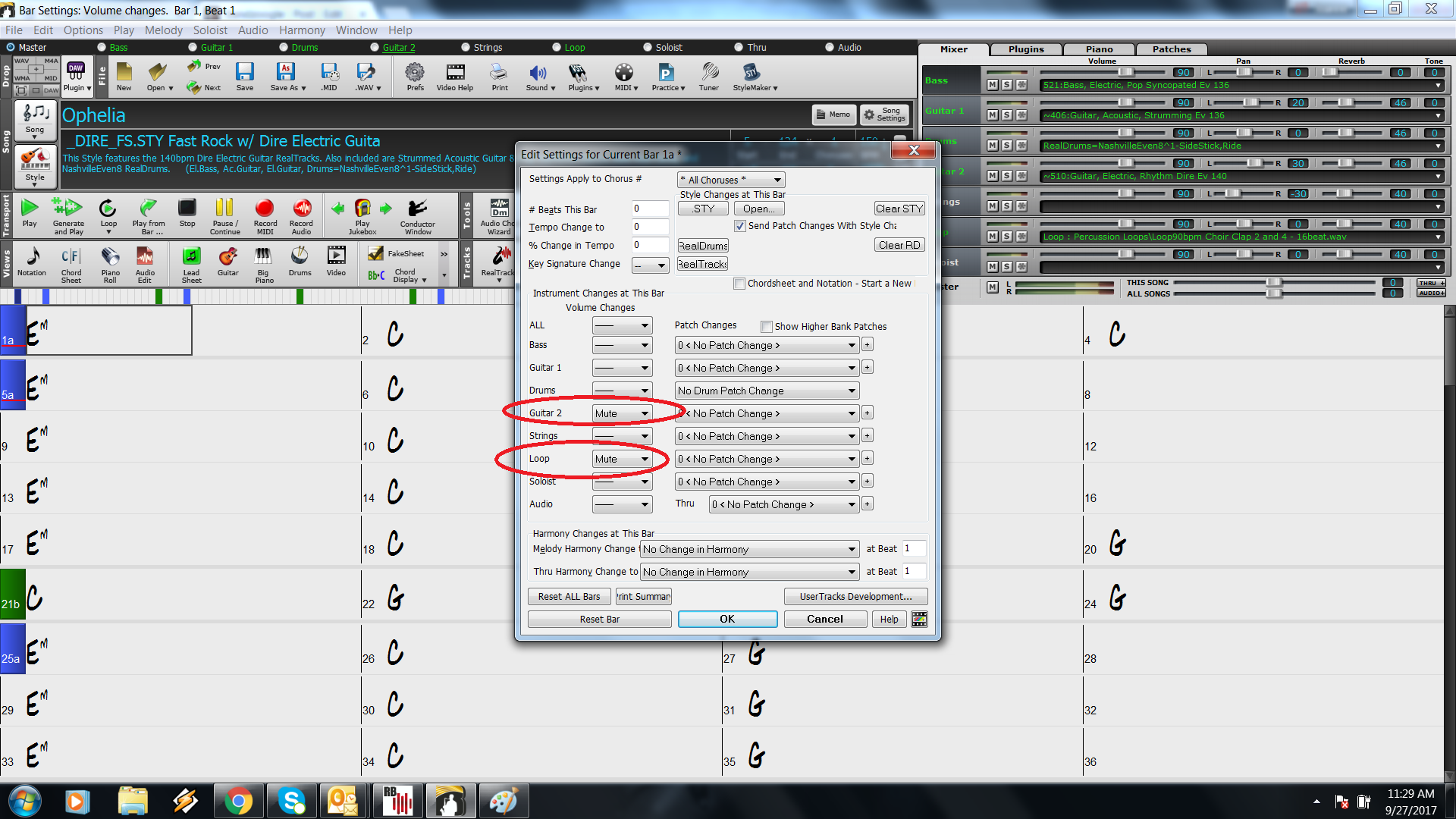 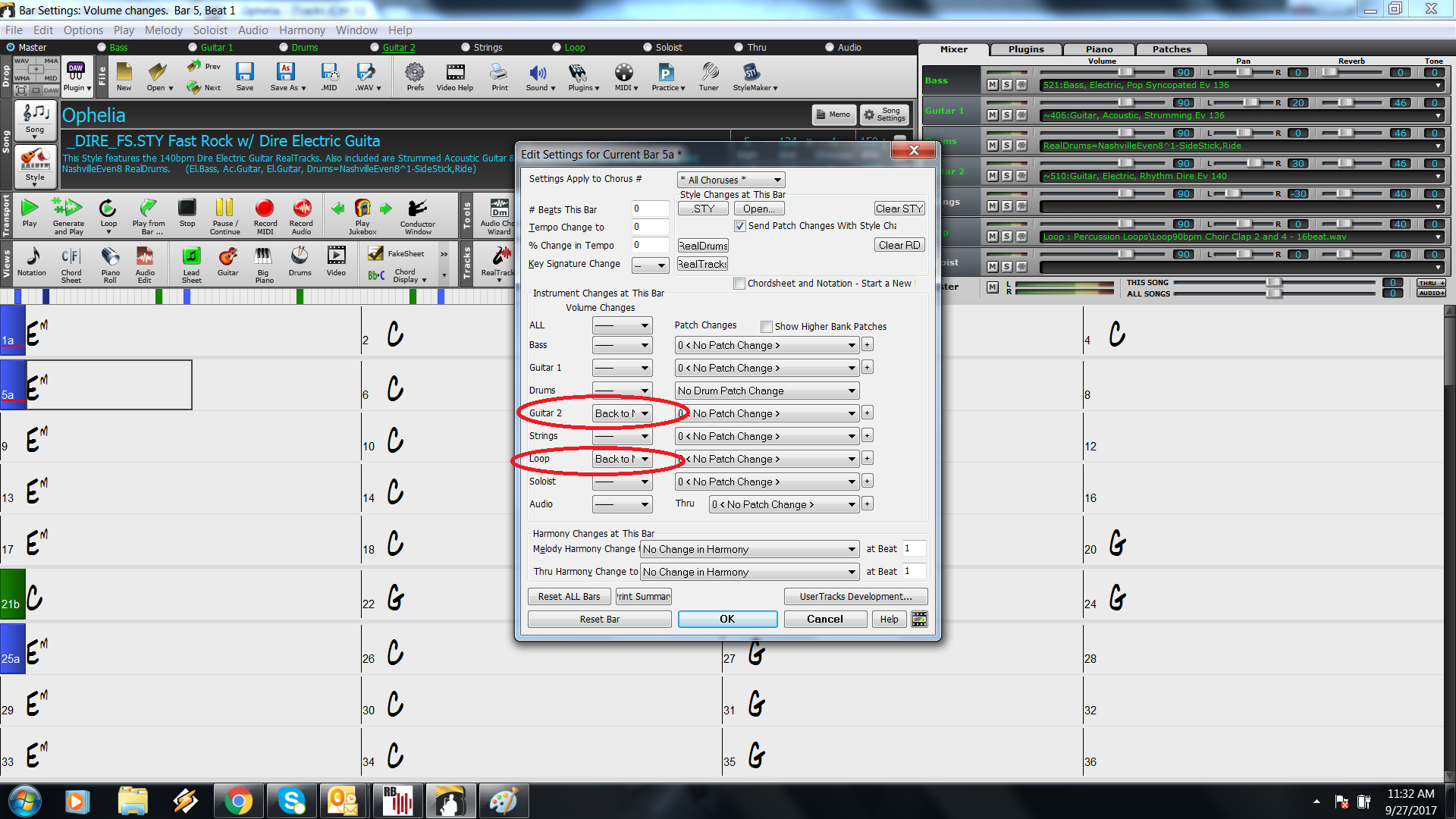 You will notice the little red underline on the first bar and on the fifth bar. This shows you that you have "something going on" behind the scenes. In this case, the electric guitar and loop has been muted in bar one and then set to "back to normal" in bar 5. 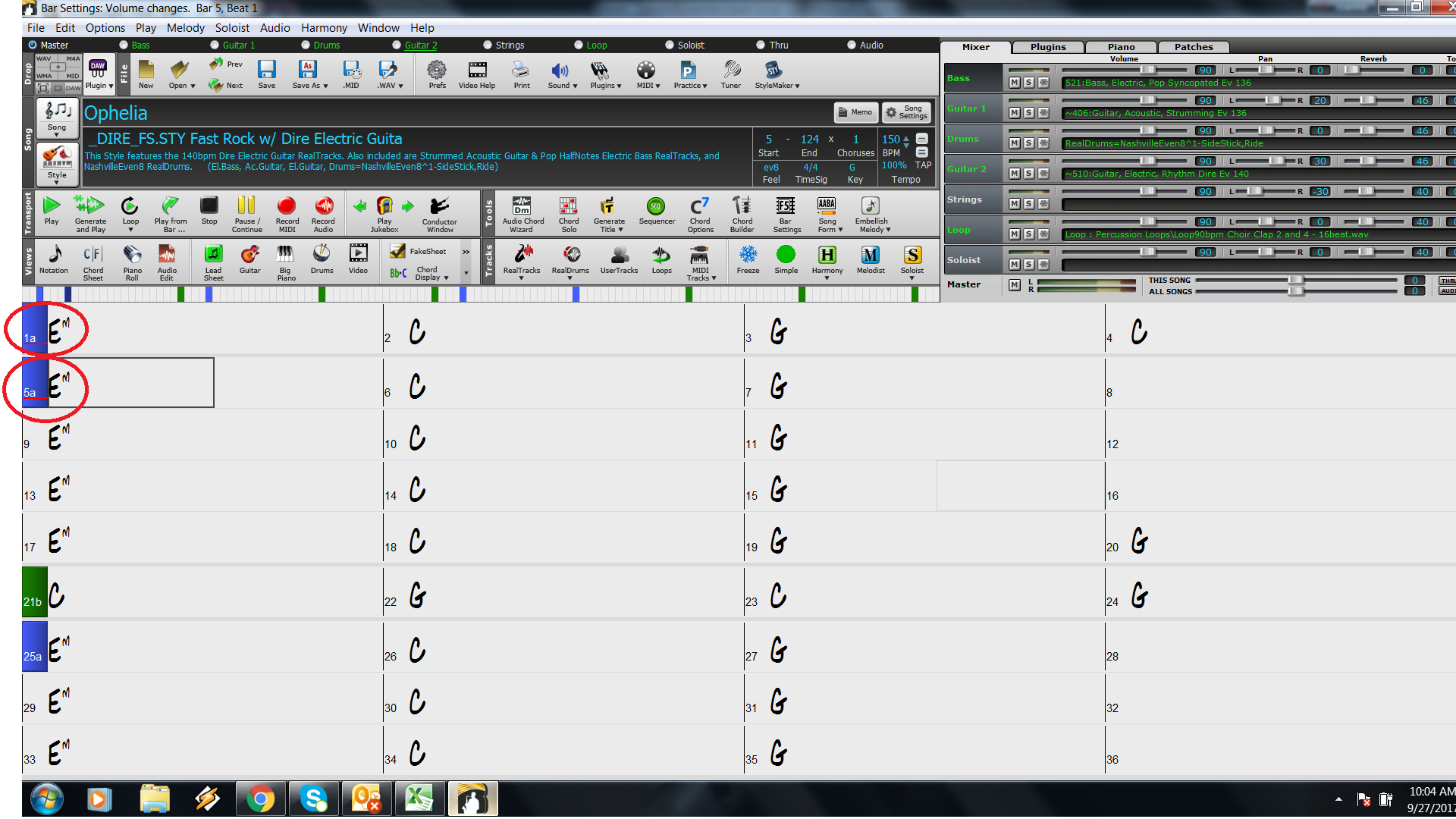 Now, to get the "hold" effect on the other guitar, the piano and the bass, right click on bar one and select "Chord settings". 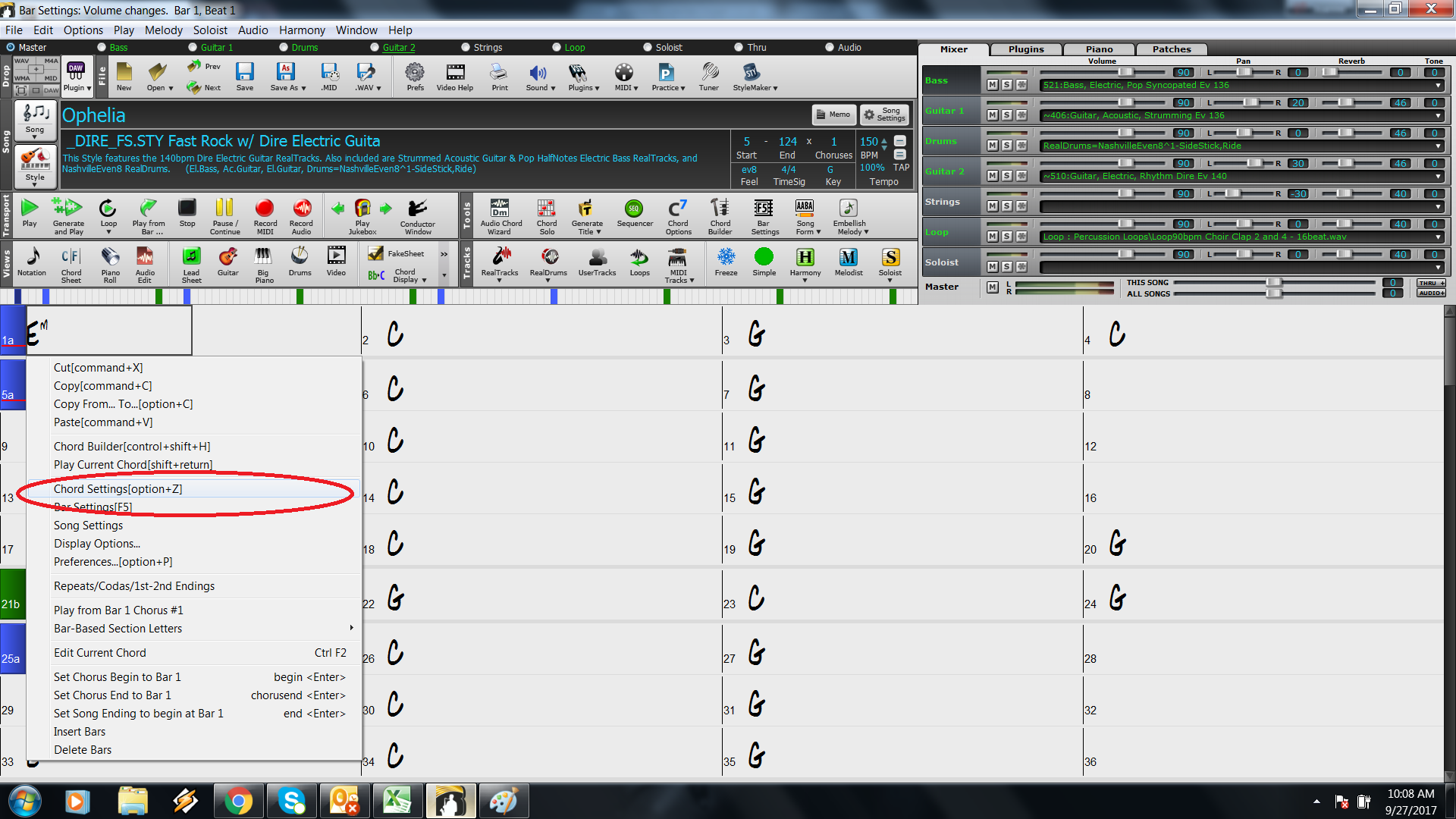 And then select "Hold chord" from the drop down menu. 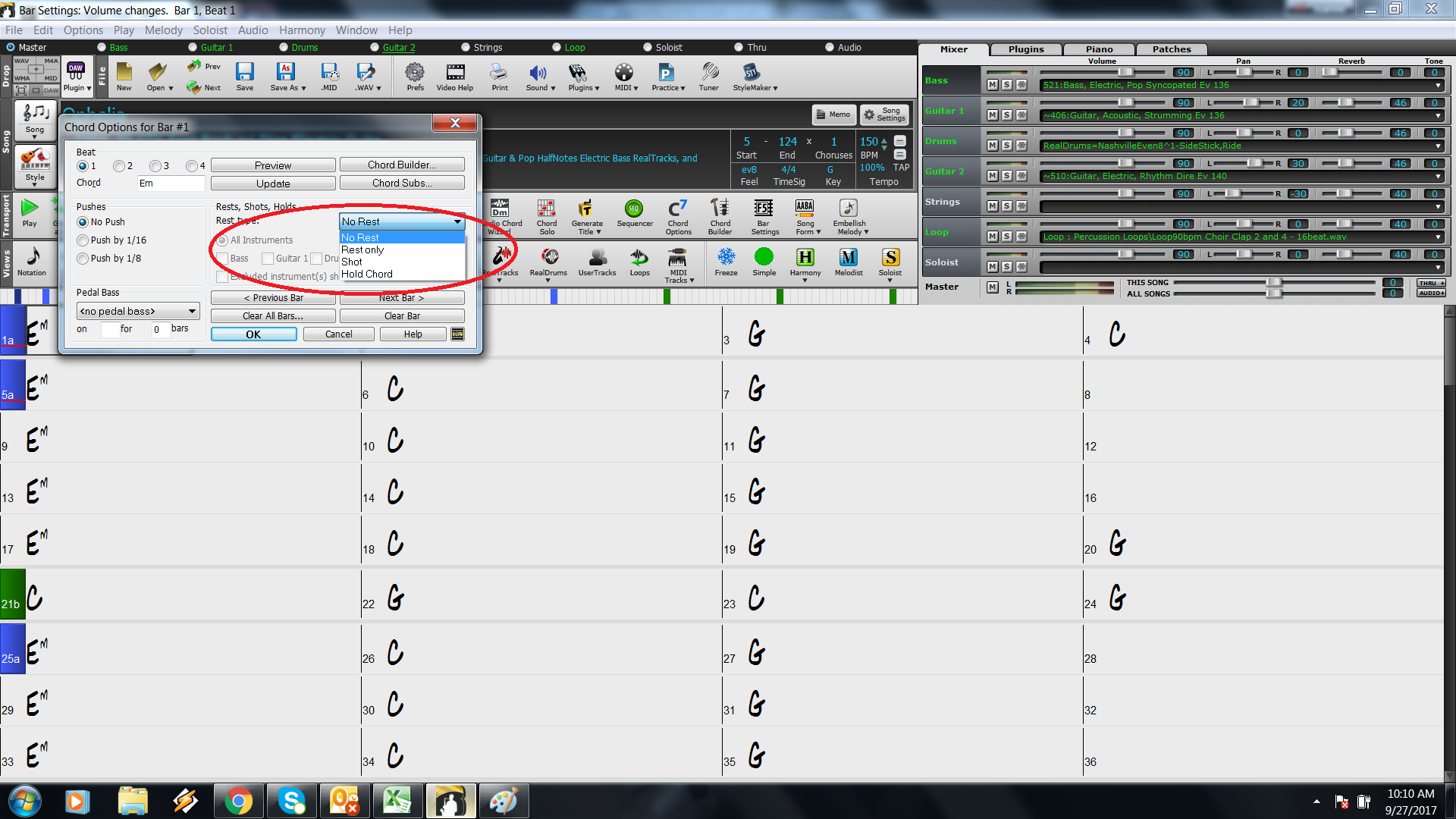 Then select "All except" and select "drums". 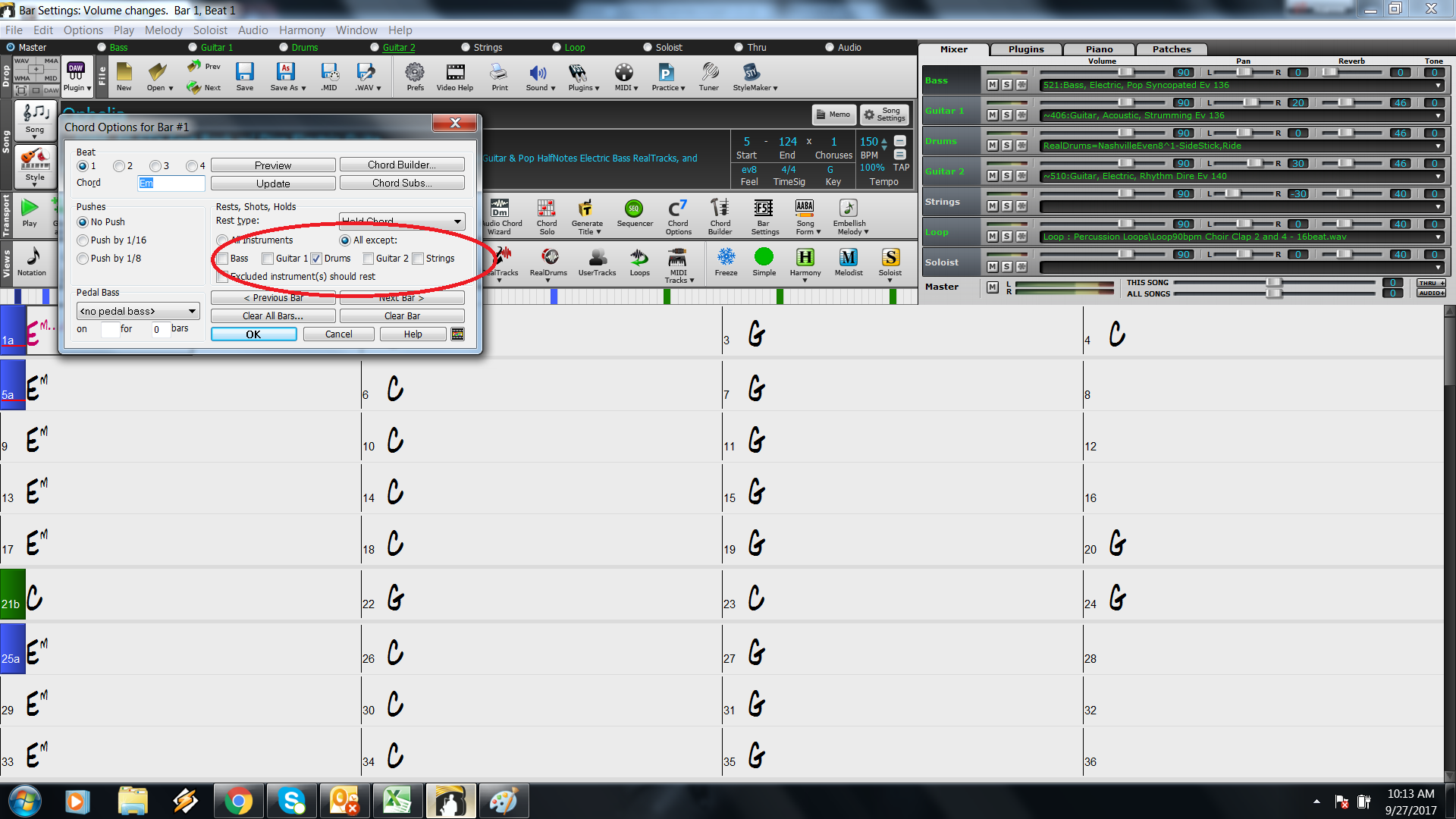 You will notice that Band-in-a-Box changes the chord symbol to red, places three dots after the chords symbol and the has a small"d". This shows that there is a "hold" on the chord for everything except the drums. A quick way of entering this notation is simply to type in the chord symbol, three dots and then a "d". ie in bar number 2, I could type in "C...d" and this would have the same effect as right clicking and selecting "Chord settings, etc.. For "Stop and Smell the Roses" I did this for bars numbers 2, 3, and 4 and in other places in the song where I wanted to add interest by having certain instruments to hold while others continue playing.

My preferred method of putting holds into a song is using RealBand. This is because I generally do this after I have recorded and tuned my vocals and I have moved my workflow over to RealBand. I also find Realband to be very flexible in that I can regenerate only certain tracks in certain bars to obtain the "hold effect" in those bars. I can also use holds on additional tracks that I generated after transferring my workflow over to Realband. (In the song "Stop and Smell the Roses" I added a banjo and a mandolin in Realband).

Here, I have opened the basic Band-in-a-Box SGU file (with no holds) in Realband. You can see all the instruments playing all the time. 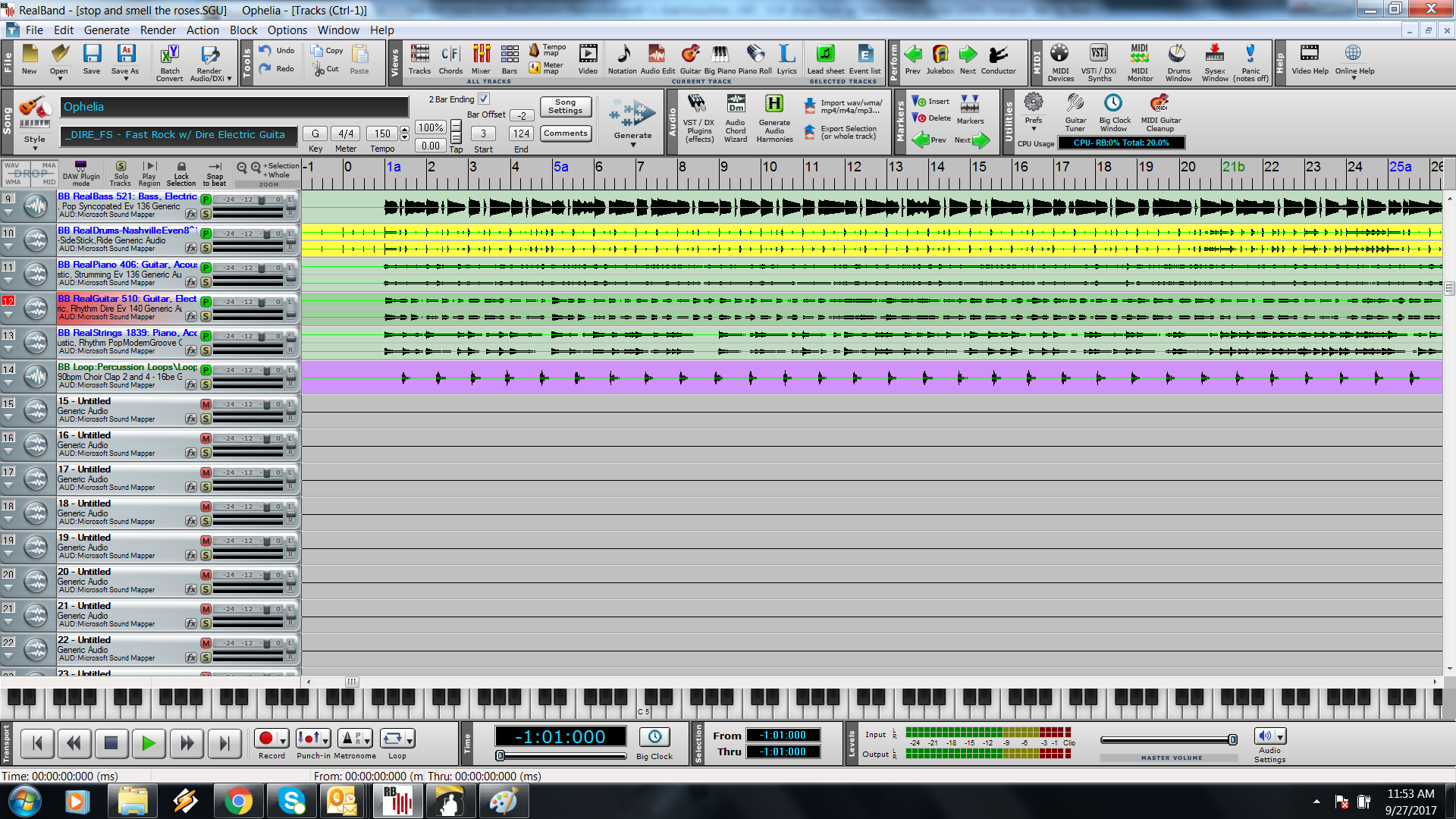 To get the desired effect in the intro I will simply do the following.

1. Delete the loops and electric guitar from bar 1 to bar 4 (just be careful that you select a place in the track where there is no audio when deleting) 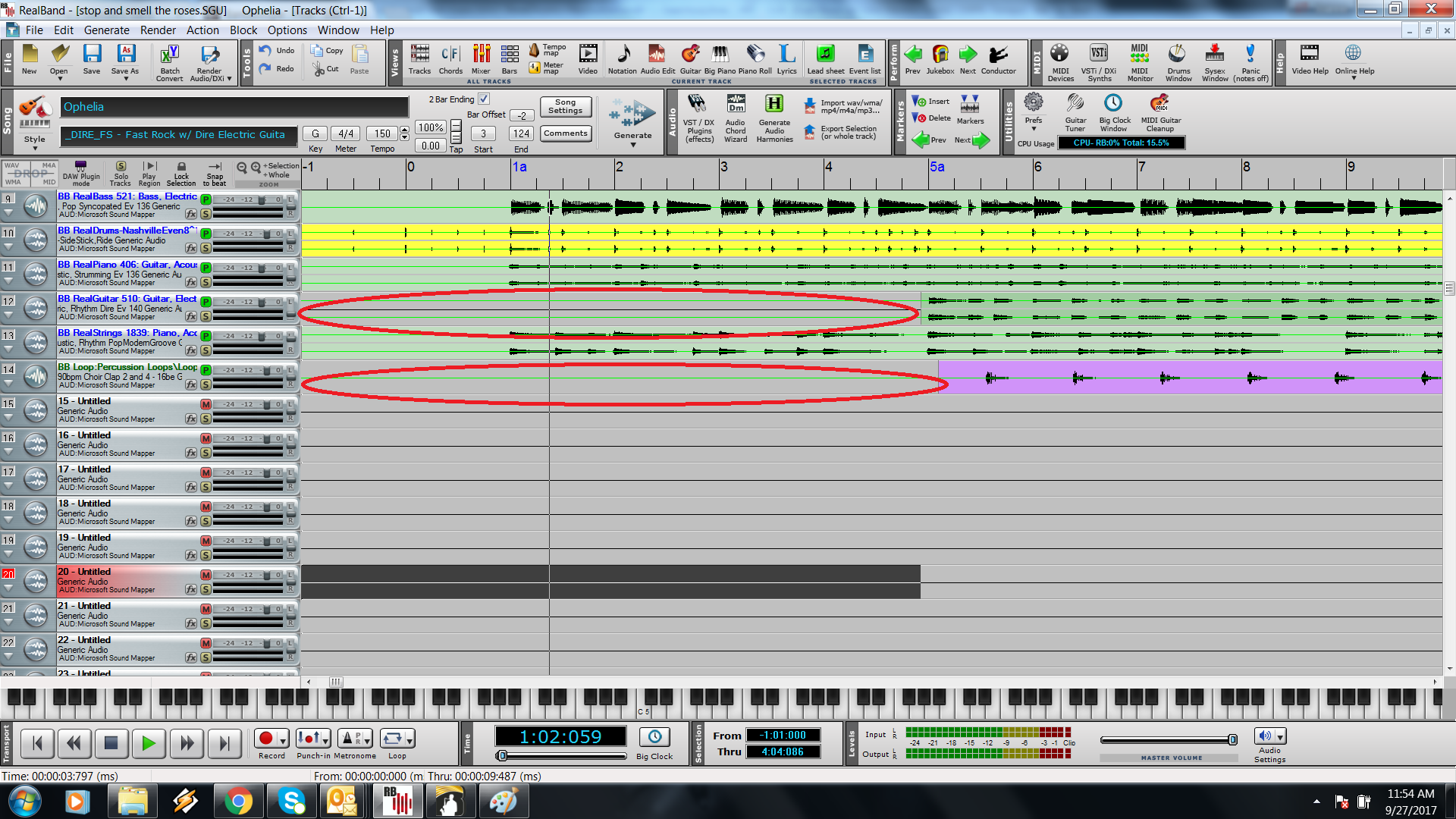 2. Open up the "Chords" view in RealBand and enter the chord and then three dots "..."  in the required spots. 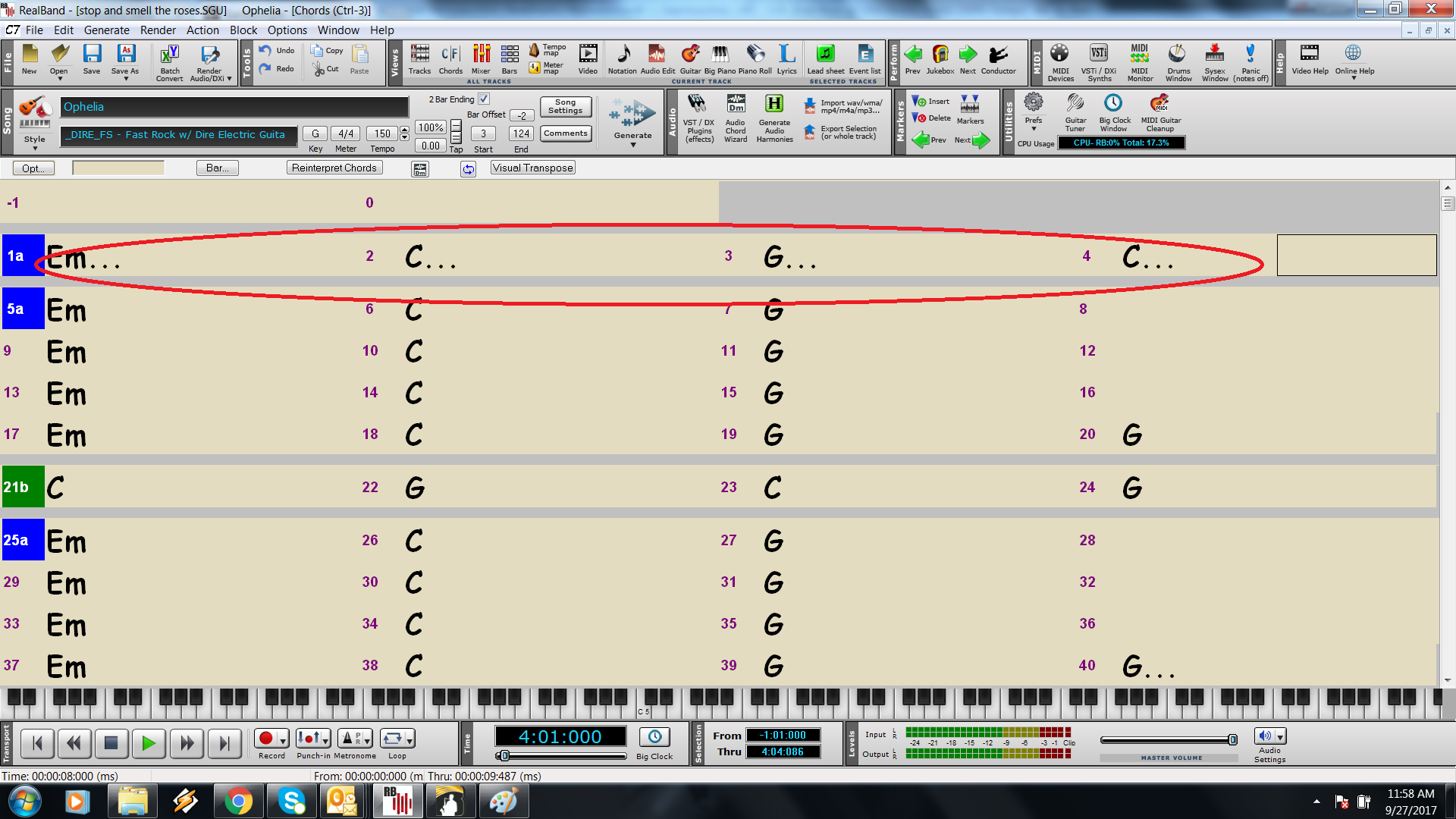 3. Now I go back to the tracks view and regenerate only the tracks I want to "hold", which in this case is the bass, the acoustic guitar and the piano. 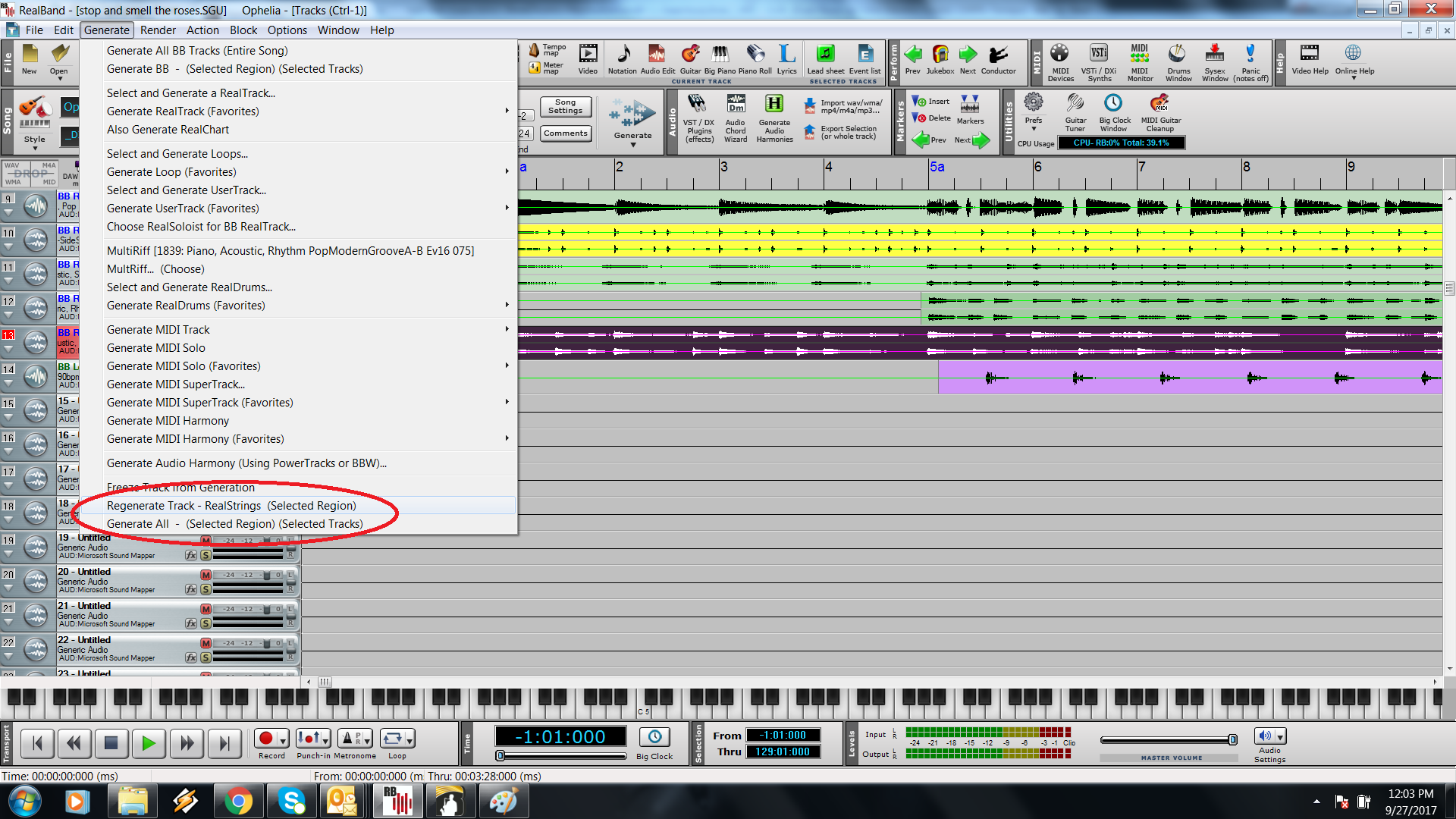 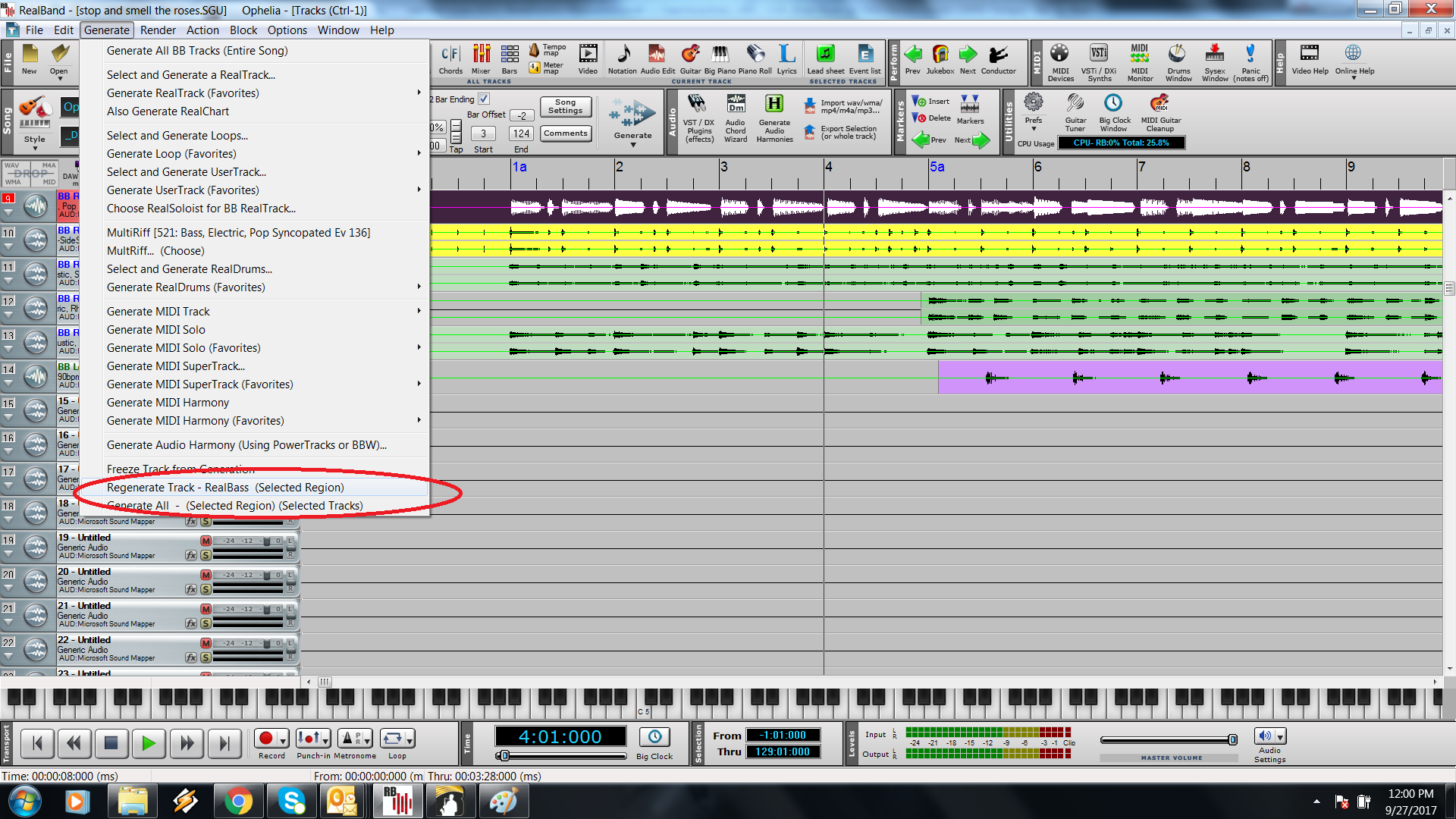 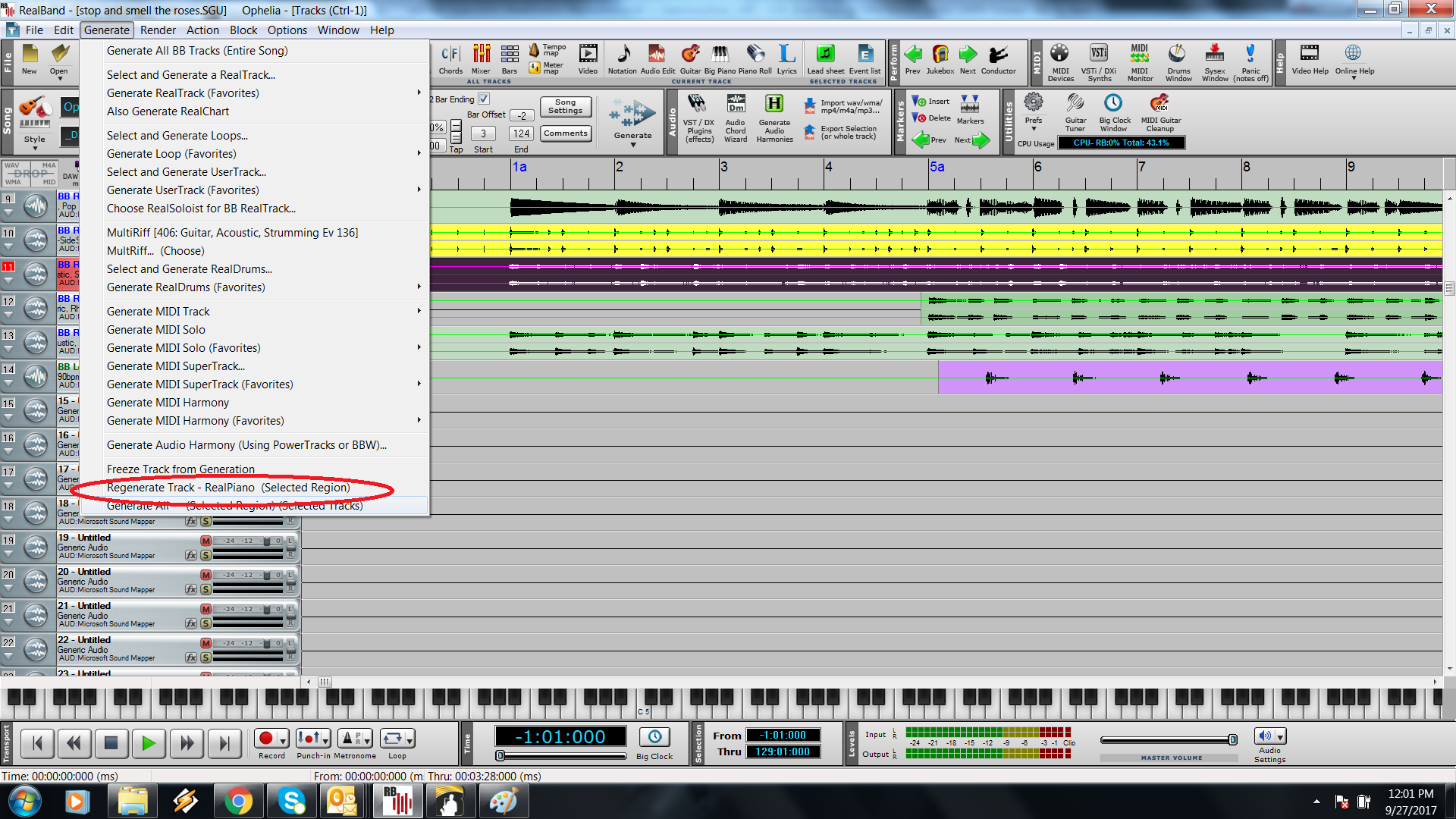 Often, I will decide that I want only one instrument to hold in a certain place in the song. I will just, open the "chord" view, type in the chord and the three dots and then regenerate just that instrument in that specific spot.

Then go back to the track view and regenerate required instrument in the bars around bar 20. Note;make sure you have a smooth transition to and from the newly generated section. I will often repeat this with other instruments until I have the desired effect. 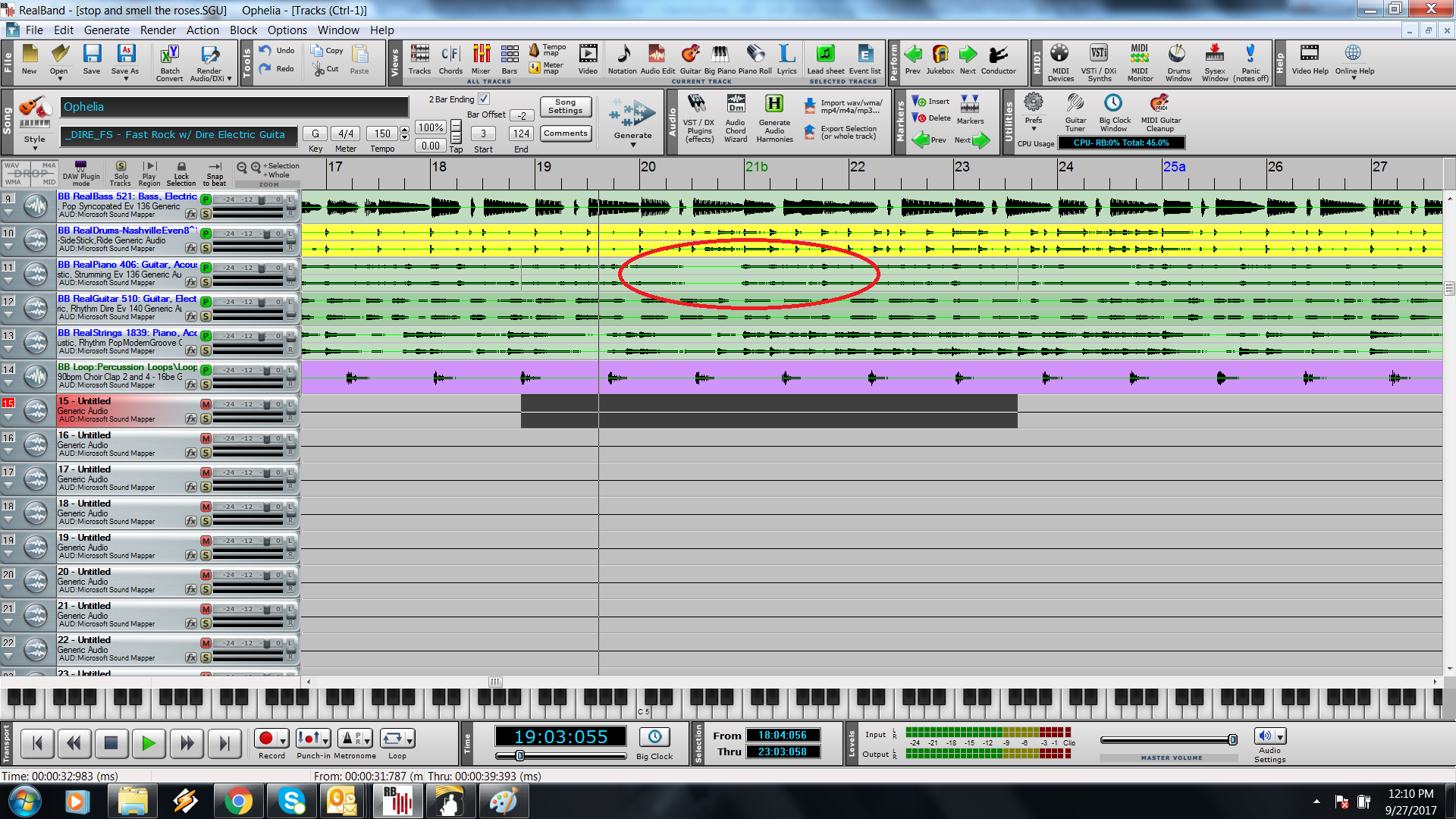 That is all for a fairly short blog post this time. I hope  have learned something about using holds. I cover more tips and tricks in how to sweeten your arrangement in my online video course . You can learn more about the course here First song with Band-in--a-Box video course

If you have an example of a song where you have use holds to great effect I would love to hear it.

I hope you have a wonderful and musical day.